Controversial "super shoes" worn by the two middle-distance runners who smashed world records in Valencia this week are distorting the true ability of elite athletes, according to one of the most prominent scientists working in the sport.

Yannis Pitsiladis also warned that the increasing influence of advanced technology in footwear was undermining the integrity of the sport and was not being properly addressed ahead of the Tokyo Olympic Games. 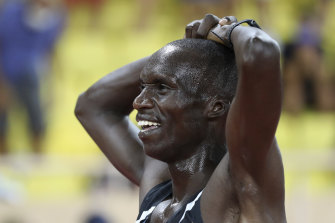 Pitsiladis, who was involved in a rival project to break the two-hour mark without the assistance of such footwear, said the help provided by them and other forms of technological advances could threaten athletics's credibility at the Tokyo Games.

He also cited the personalised air-conditioning system that Sony has produced for the Olympics, to assist with the heat in Japan, as an example of another development that could affect the performance of a competitor.

"Nike has certain patents [on the shoe] that may offer them protection but Adidas and other brands are attempting to do the same as them, and the sport of athletics is powerless to do anything as they rely on this sponsorship [from the brands involved]," he said.

"If nothing is done to rectify the situation, we must be prepared for a backlash during the Olympic Games.

"There is an urgent need to examine technology fairness.

"Sport needs to be proactive and set up an independent committee, technology integrity unit or advisory group to examine the use of such technology before it is used in elite sport – because after it enters the sport it is then impossible to withdraw."

New York and Berlin Marathons cancelled due to coronavirus

Australia ganged up on Perec. She deserves an apology

Prince Harry sends heartwarming message as London Marathon 2020 gets underway
Best News
Recent Posts
This website uses cookies to improve your user experience and to provide you with advertisements that are relevant to your interests. By continuing to browse the site you are agreeing to our use of cookies.Ok