‘She’s got a bit of Shane in her’: Shyla Heal lights up WNBL

Teenage basketball sensation Shyla Heal, the daughter of Australian legend Shane Heal, is ready to play for the national team and is in the mix for Olympic selection, according to Opals coach Sandy Brondello.

Heal, who debuted in the WNBL aged 14, has been one of the standouts in the pandemic-affected season and has helped her Townsville Fire side to fourth on the ladder and a 4-2 record. 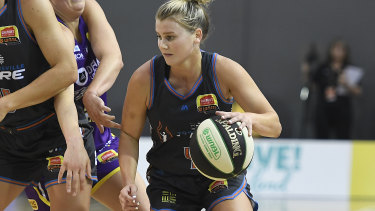 Shyla Heal drives to the basket during Townsville’s WNBL win over the Melbourne Boomers on Sunday.Credit:Getty Images

The guard led the Fire to an 87-75 win over the Melbourne Boomers on Sunday and a 91-81 win over the Bendigo Spirit on Saturday.

Coach of the Opals and WNBA side Phoenix Mercury, Brondello said on Sunday that Heal had improved a lot over the off-season.

"It was about her team needing her to step up at that given time [against the Spirit]," Brondello told Offsiders.

Brondello indicated that Heal had what it takes to soon make her Opals debut.

"Obviously her future is bright. We have a lot of competition to make that final 12 of that Olympic team but she’s right there," she said.

"I am not going to say that she’s not [right there]. If she keeps improving and then it’s about how we mesh the team together.

"Her future certainly is bright … also in the WNBA where she will hopefully be a first round pick next year.

"She’s got a bit of Shane in her, which is a positive thing [in] you don’t back down."

Heal’s father Shane played for the Australian Boomers at four Olympic Games and for the Minnesota Timberwolves and San Antonio Spurs in the NBA.

Rockets vs. Thunder Game 5 takeaways as Russell Westbrook not needed in blowout

Dwyane Wade agrees: Anthony Davis is the best teammate LeBron James has ever had

What sets Nikola Jokic apart from other NBA superstars

Fred VanVleet 're-signs with Toronto Raptors in four-year, $85m deal'
Auburn men’s hoops imposes postseason ban
Best News
Recent Posts
This website uses cookies to improve your user experience and to provide you with advertisements that are relevant to your interests. By continuing to browse the site you are agreeing to our use of cookies.Ok