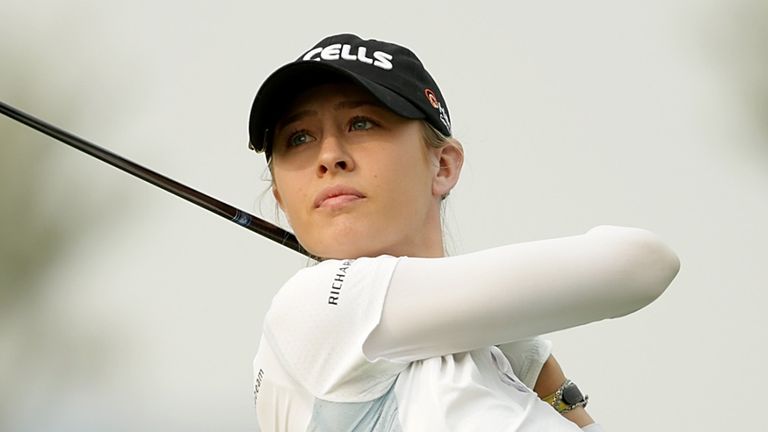 Nelly Korda retained control of the ANA Inspiration after firing a bogey-free 67 to open up a two-shot lead at the halfway stage in California.

Korda’s measured five-birdie round lifted her to 11 under par, two clear of Mirim Lee, while 2014 champion Lexi Thompson matched the leader’s 67 to stay four behind her Solheim Cup team-mate. Mel Reid will go into the weekend six shots off the pace after adding a 70 to her opening 69, with Georgia Hall one stroke further adrift following a 71 on day two at Mission Hills Country Club.

Korda’s hopes for a first major title remained intact thanks to a composed performance on another sweltering day in Rancho Mirage, the 22-year-old making birdie at the first for the second day running before two clutch putts from outside 20 feet salvaged pars on each of the next two holes.

The world No 3 settled with a run of less-stressful pars before birdies at the the eighth and ninth completed an outward 33, and she then birdied both par-threes on the back nine – the 14th and 17th – although she was unable to close with a four at the par-five last which would have matched the 36-hole scoring record.

“I’ve been hitting it really good off the tee. Even off the fairway, I mean, I’m not missing it by much,” said Korda. “Because it’s so grainy out here, you catch it a little fat or you don’t catch it so clean, but honestly I’ve just been playing really solid golf.”

South Korea’s Mirim Lee birdied three of the last five holes to return a superb 65, the low round of the second day, while Thompson enjoyed a hot start and also kept a bogey off her card to remain firmly in contention.

Thompson birdied three of the first four holes, although she manged only two more gains at the ninth and 15th and ended the round in a share of third with Nanna Koerstz Madsen on seven under par.

Young Danish star Madsen, making only her third appearance in the tournament, put together a solid three-birdie 69, while Reid will look to put early pressure on the leaders after her three-birdie 70. Reid moved into a tie for seventh with the in-form Danielle Kang, winner of the first two events after the LPGA Tour resumed following the coronavirus shutdown, the world No 2 adding a 71 to her opening 68.

Daly facing greatest battle after being diagnosed with bladder cancer
Cinderella story: Caddyshack star caddies during US Open practice round
Best News
Recent Posts
This website uses cookies to improve your user experience and to provide you with advertisements that are relevant to your interests. By continuing to browse the site you are agreeing to our use of cookies.Ok