We haven't heard much from Danny Noonan since he sank the putt that beat Judge Smails and Dr Beeper at Bushwood all those years ago. The plan was to attend law school at St. Copious, but maybe golf hustling got in the way? By the time we returned to Bushwood in 1988, Noonan was nowhere to be found.

But Noonan – or Michael O'Keefe, who played him in the iconic 1980 comedy Caddyshack – is back on the bag, at least for a few days. He got a job looping for Danny Balin during practice rounds for this week's US Open at Winged Foot in Mamaroneck, NY. 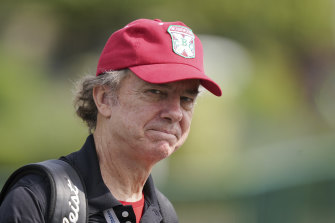 Caddyshack actor Michael O’Keefe walks the grounds before the US Open at Winged Foot.Credit:AP

O'Keefe, who's 63 and still keeping plenty busy as an actor, grew up a short distance away from Winged Foot in Larchmont, and spent a few years caddying at the club in the early 1970s. He also got some emergency golf lessons from the club's pro staff after bluffing about his golf skills to get the Caddyshack role. Plus, O'Keefe's brother would eventually become a member and serve as club president. So this isn't just a lark for O'Keefe, who has plenty of knowledge to offer about a Winged Foot course that's set up to be a brutal test this week.

"The 5000-yard ninth hole will blow everyone's mind, not because it's long, but because it's straight. After eight holes of doglegs, that long stark, straight tunnel will be unnerving," O'Keefe wrote earlier this month in laying out his caddie qualifications for Golf.com.

"The 633-yard par-five 12th hole – yes, I've stopped hyperbolising – will certainly be hit by one or two big hitters in two, but that choked fairway will be the end for many badly played second shots."

Balin, the head golf pro at Fresh Meadow Country Club on Long Island who qualified for the Open because he's in the top three of the 2019 PGA professional player of the year standings, took O'Keefe up on his offer after reading the Golf.com article.

"I try to take this somewhat serious, so I would never do this during a tournament round," Balin told the New York Post. "But I was like: 'Yeah, this will be cool. Danny Noonan. Monday and Tuesday.' It'll be a fun couple of days. It'll lighten the mood up."

O'Keefe, who told the Post he hopes to initiate a donation fund to aid the caddies who were put out of work during the novel coronavirus pandemic, is writing a notebook for Golf.com during his week at Winged Foot.

"I've also received much unsolicited advice like 'Do squats,' as if squatting for a few days might enhance my bag-carrying capacity," he wrote Sunday.

And as for the Caddyshack quotes that are sure to fly fast and furious with Danny Noonan himself on the bag, O'Keefe seems to be at least partially OK with it.

"Oh, before I forget, I should probably mention that I haven't done any drugs since the making of Caddyshack in 1979, so any references like 'Do you do drugs, Danny?' are not only outdated, but also demonstrate a need to update your film references for the 21st century," he wrote.

"On the other hand, think of the bonus of having your caddie razzed with shouts and hisses of Noonan! while you putt (not by the fans, mind you, because there won't be any – I mean by the players). Who could ask for more?"

ANA Inspiration: Nelly Korda retains lead as Lexi Thompson stays in hunt
Sam Horsfield out of US Open after positive coronavirus test
Best News
Recent Posts
This website uses cookies to improve your user experience and to provide you with advertisements that are relevant to your interests. By continuing to browse the site you are agreeing to our use of cookies.Ok