The PGA Tour’s dream of setting a Covid-19 safety standard for other American sports to follow was in deep trouble on Wednesday night.

Brooks Koepka and Graeme McDowell joined a growing list of withdrawals from the Travelers Championship, after their respective caddies, Northern Irishman Ricky Elliott and Mancunian Ken Comboy, tested positive. They were soon followed by last week’s winner Webb Simpson and Koepka’s brother, Chase, who only made it into the field on Monday through qualifying.

In an effort to contain the damage and provide reassurance, the tour issued a lengthy new list of safety protocols, with tour commissioner Jay Monahan voicing his frustration. 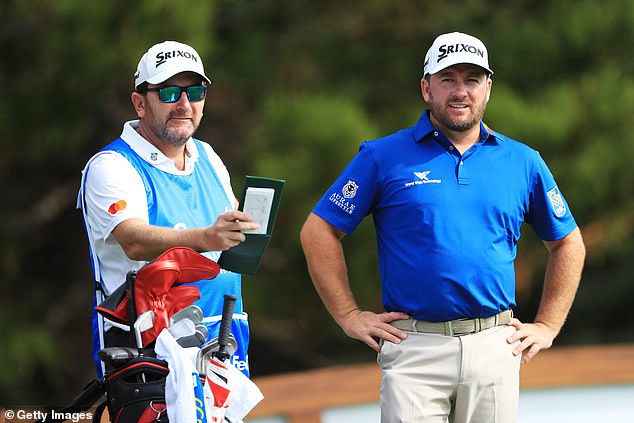 Graeme McDowell (right) has withdrawn from the Travelers Championship after his caddie, Ken Comboy (left), tested positive for coronavirus. McDowell himself tested negative

‘While we have been thorough, we need to use these latest developments as a wake-up call,’ he said in an email to all the players. ‘We need you to do your part.’

A press conference with Rory McIlroy was cancelled to save him from an avalanche of coronavirus questions, with a grim-faced Monahan stepping in.

‘We have been working since March on a best practice for professional sports leagues to follow, but it is impossible to eliminate all risk,’ he said. ‘We have to use this week’s developments as a reminder, and reinforce to everyone that we need to adhere to social distancing and all our safety protocols.’ 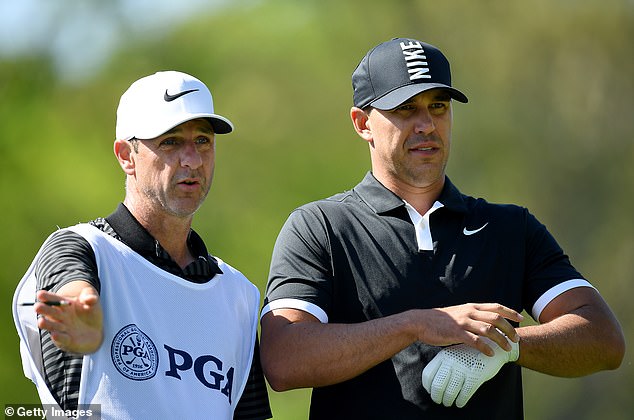 Monahan warned there would be ‘serious consequences’ for anyone caught breaking the protocols. ‘We feel a great responsibility to inspire people and make sure we’re on screens between Thursday and Sunday,’ he said. ‘The ability to sustain the business is contingent on people doing the right thing, and there will be significant repercussions for anyone who doesn’t.’

Starting on Thursday, the Travelers event in Connecticut looked the most enticing tournament yet with a field boasting nine of the world’s top ten.

On a positive note, Monahan pointed out that in three weeks, there had only been seven positives tests out of 2,757 carried out. Most of the withdrawals from the event were out of what Monahan called ‘an abundance of caution’.

He refused to go into how many positive tests would result in the event being cancelled, but said he was confident they could keep the show on the road. 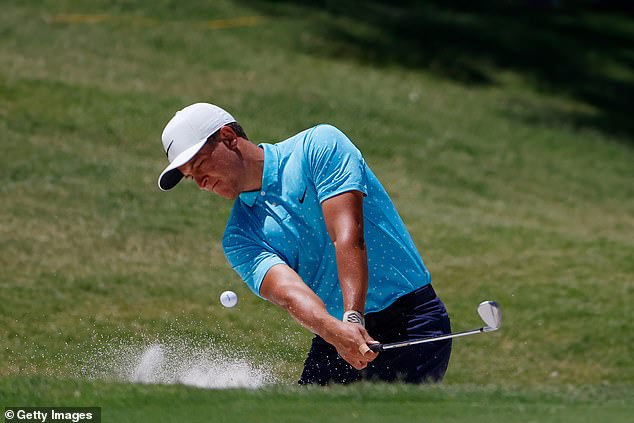 It was hard not to feel sorry for Brooks Koepka, who did everything he could to keep the virus away. He rented houses big enough to install his entire team, and brought his own chef and gym equipment to each pit-stop.

The alarm bells started to ring after Comboy, who had taken a flight to Orlando packed with passengers to attend the funeral of a close friend, tested positive. McDowell withdrew from the event but not before informing Koepka, with whom he’d played a practice round on Tuesday.

Koepka and Elliott had both tested negative on Monday but had a retest on Wednesday morning that delivered the bad news for the latter, who attended the same funeral as Comboy.

‘I was shocked, but Ricky has my full support,’ said the four-time major champion, who tested negative once more. ‘I’ve got to pull out to protect everybody else, It’s the only way this tour can continue.’

How much longer it can continue has become the biggest question of all.

Dustin Johnson finishes at 30 under, wins by 11 at Northern Trust

How the PGA Tour navigated its toughest week yet

Rallying cry for Masters to go back to Augusta National Invitational
Ryder Cup 2020: Should the event at Whistling Straits be postponed?
Best News
Recent Posts
This website uses cookies to improve your user experience and to provide you with advertisements that are relevant to your interests. By continuing to browse the site you are agreeing to our use of cookies.Ok