Baseball Hall of Famer Joe Morgan died Sunday at his home in California due to a non-specified polyneuropathy, his family announced. He was 77.

Morgan played 22 seasons in the big leagues from 1963-1984. Although he began his career with the Houston Astros when they were known as the Colt .45s, he's best-known for his years as a member of the Cincinnati Reds' "Big Red Machine" teams of the 1970s.

It was in Cincinnati that he won back-to-back MVP titles (1975-76) during the Reds' consecutive championships. Between the two seasons, Morgan hit 44 home runs and batted .324 with a .997 OPS, while stealing 127 bases over those two years. As one of the game's all-time second basemen, Morgan captured five consecutive Gold Glove titles (1973-77) and he made 10 All-Star teams throughout his career. 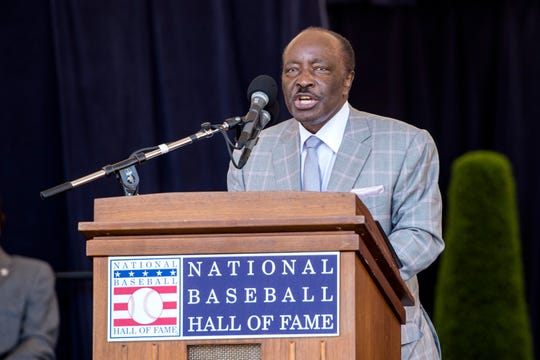 Born in Texas but raised in California, Morgan spent the first nine seasons of his career with the Astros. The left-handed hitter finished second in the 1965 Rookie of the Year balloting and made his first All-Star team the next season. He'd make one more Midsummer Classic (1970) before the highlights of his career with the Reds; Cincinnati unveiled a statue of Morgan at Great American Ballpark for his accomplishments in 2013.

“Joe wasn’t just the best second baseman in baseball history, he was the best player I ever saw and one of the best people I’ve ever known,” Hall of Fame catcher and Reds teammate Johnny Bench said in a statement via the Morgan family. “He was a dedicated father and husband and a day won’t go by that I won’t think about his wisdom and friendship. He left the world a better, fairer, and more equal place than he found it, and inspired millions along the way.”

He was an All-Star each season he played for the Reds, and when he left Cincinnati after the 1979 season, he rejoined Houston for the 1980 campaign. He then spent two seasons with the San Francisco Giants, one with the Philadelphia Phillies and one with the Oakland Athletics in 1984 before calling it a career.

Morgan retired with a .271 lifetime batting average, 2,517 hits, 1,133 RBI and 1,865 walks, leading the National League four times. He was inducted into the Baseball Hall of Fame in 1990 and is also a member of both the Reds and Astros team Hall of Fames. His career bWAR of 100.5 ranks fourth all-time among second basemen.

Almost immediately after his playing career, Morgan made the transition from the field to the broadcast booth, first at ABC and then alongside Bob Costas at NBC. From 1990-2010, viewers knew him as the color commentator on ESPN's "Sunday Night Baseball" telecasts with play-by-play partner Jon Miller. His commentary won a Sports Emmy for "Outstanding Sports Personality" and his voice was used on the now-defunct MLB 2K video games.

Morgan is the fifth Baseball Hall of Fame member to die since Sept. 2: Tom Seaver, Bob Gibson, Whitey Ford and Lou Brock have all since passed. A sixth Hall of Famer, Al Kaline, passed earlier this year.

“Joe was one-of-a-kind,” his wife of 30 years Theresa said in a statement from the family. “Both on and off the field, he fought for what he believed in and dedicated himself to helping others rise and thrive. His example will inspire people for decades to come.”

Morgan is survived by four daughters: twins Kelly and Ashley from his marriage to Theresa Morgan, and Lisa and Angela from his first marriage.

Why Aaron Rodgers having ‘down years’ is a myth

Opinion: Can the NFL pull off a complete season with specter of COVID-19 looming?

AP source: Bills-Titans on with no positives for TN, Pats
Who will be the next White Sox manager? Five candidates for job after Rick Renteria’s departure
Best News
Recent Posts
This website uses cookies to improve your user experience and to provide you with advertisements that are relevant to your interests. By continuing to browse the site you are agreeing to our use of cookies.Ok