‘I could have walked away:’ Charley Steiner broadcasting Dodger games from his living room during pandemic

BRENTWOOD, Calif. — Los Angeles Dodgers broadcaster Charley Steiner took off his headset, leaned back on the couch in his living room, which has been converted into a TV studio, and let out a guttural groan into the night.

“This,’’ Steiner said, “was a 2020 game. My God that was awful.  When you don’t have crowds, and nothing to energize these guys, what can happen just happened.

“It wasn’t an oil painting. It was a finger painting.’’

Steiner laughs, not like those out-of-control, contagious fits of laughter that became famous during his ESPN’s SportsCenter days, but certainly he was amused, with the Dodgers taking nearly 4 ½ hours to complete a 10-9, 10-inning victory Tuesday over the Arizona Diamondbacks.

“This game will not wind up in Tom Emanski’s time capsule,’’ Steiner said of the famed coach behind those old instructional video tapes, “or anyone else’s for that matter.’’

But at least Steiner didn't have to subject himself by broadcasting the game at Chase Field in Phoenix.

Steiner is doing the play-by-play broadcasts of the Dodgers’ games right from his living room, with three huge TV screens in front of him. There’s a live feed from the game front and center. A screen displaying where the players and baserunners are positioned to his left. Another showing the bullpens, scoreboard, lineups and the clock to his right. 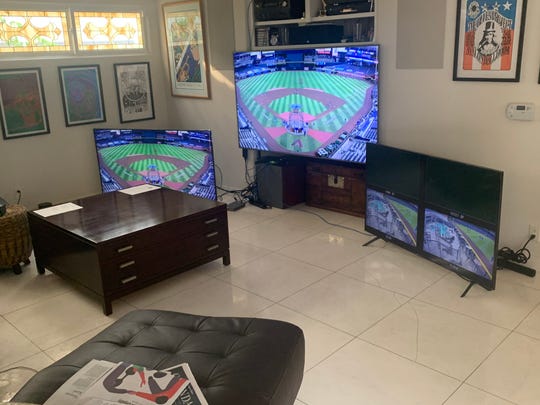 It’s the most unique setup in all of baseball, with Steiner not having seen broadcasting partner Rick Monday or producer/engineer Duane McDonald since last October, but working together on the broadcasts night after night – social distancing at its finest – as if it were business as usual.

“It’s been a much more satisfying and gratifying experience than I could have imagined,’’ Steiner tells USA TODAY Sports, who for the first time Tuesday permitted a reporter to watch the broadcast from his home. “You heard during this pandemic that people are learning to work from home, but I never thought it would be humanely possible that I could.

"I can’t thank the Dodgers enough privately, and publicly.’’ 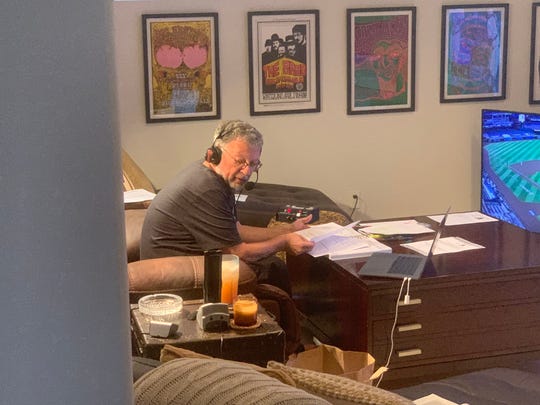 Steiner, 71, only the 17th sports broadcaster to be inducted into the National Radio Hall of Fame, was prepared to end his 51-year career and 16-year tenure with the Dodgers this spring. He informed the Dodgers that with his age, and being a diabetic, it was simply too risky for him to leave his home and broadcast games this year.

“I talked to my doctor and I said, 'Well, what do you think?’’’ Steiner said. “He said, 'Well, as a friend, I would like for you to come back. You and Mo (Monday) are my soundtrack for the summer.’

“'As a doctor, are you out of your (expletive) mind. You have a COVID target on your back.’

“I’m a hanging curve in the world of coronavirus.’’

Steiner decided he would opt out of the season, just like 22 players throughout the game, including Dodgers veteran starter David Price, unknowing whether he’d ever be back.

“Then, I get this reprieve from the governor.’’

“I feel like an astronaut orbiting the earth,’’ Steiner said. “You know there’s stuff going on down there because I can see it on my control pattern. Really, this could be the wave of the future.

“What do you get being at the ballpark now? You don’t see the players. Can’t talk to anybody. There are no fans. So as long as there is technology, this is great.

“Besides, there are no lines at the urinal at my house.’’

The biggest piece missing from the broadcasts, of course, are the fans.

“When you have a crowd screaming, you have that excitement. But for me to go crazy and try to scream over canned noise? Now, all of a sudden, I’m in my living room as opposed to being on the stage. It sounds disingenuous to go crazy. How do you modulate your voice? How many times can you say, 'The cardboard cutouts are at the edge of their seats.'

“So, coming out of my mouth now is admiration as opposed to exhilaration.’’

Besides, the grapefruit juice and sparkling water mixture he keeps next to his scorecard can’t be found in the concession stands at Dodger Stadium.

Steiner, outside of a daily walk and grocery shopping, has left his house only for three socially-distanced dinners with close friends, and two haircuts, one which was done on his patio. He plans to soon get a white Labrador Retriever to keep him company since he no longer travels. And when you work at home, your daily wardrobe consists of, well, whatever is clean.

This day, Steiner is wearing a black Fauci T-shirt, black sweat pants and sandals. Yes, he got dressed up, he concedes, knowing a reporter was coming to coming to visit.

He may be the only man in baseball to own a T-shirt in honor of Dr. Anthony Fauci, director of the National Institute of Allergy and Infectious Diseases.

“You know,’’ Steiner said, “I’m old fashioned. I kind of believe in truth and credibility. When I saw this, I thought, (expletive), I got to get me one.’’

This is a season that no one will forget, no matter who wins the World Series, or who holds the individual honors.

“Everything is compartmentalized in this hideous, horrible year,’’ Steiner says. “You win the World Series, there will be no champagne. No hugging. There will be a socially distanced trophy ceremony. There can’t be a parade. None of those things.

“How do you keep it all in perspective without overselling it or underselling it?"

So, Steiner does his best to keep it entertaining.

He asked aloud if there would be trash-can cutouts when the Houston Astros come to town this weekend. He jabbed the 15-28 Diamondbacks by saying "You know you’re fallen on hard times when your DH is hitting .148 and your cleanup hitter is hitting .190."

He chided both teams in the ninth inning when he said, “Neither team has put on an exemplary production tonight, but one team has to win because them’s are the rules.’’

And when D-backs outfielder Tim Locastro stole second in the ninth inning, and went to third on the over-throw, but kept on running until he was easily thrown out at home, Steiner was in utter disbelief.

“There was a doo-wop song by the Impalas,’’ Steiner says, “that says, 'I ran all of the way home to say I’m sorry’ But only he wasn’t singing.’’

When the game ended, Steiner even called up the 1959 hit on his iPhone, and played it for a few more laughs.

Really, maybe this is no time to take baseball seriously. It’s a respite from life. Sure, it’ll be special to win a World Series during a pandemic, but in the end, what does it really matter?

“Every day is another footnote in history that just happens to be a ballgame.

Angels’ Keynan Middleton explains protest: ‘Use my platform for change in a peaceful way’

The Eagles being in first place is hilarious

The one constant in this uncertain sports world – We are still college football fans
LSU to allow nearly 26K fans, bans tailgating
Best News
Recent Posts
This website uses cookies to improve your user experience and to provide you with advertisements that are relevant to your interests. By continuing to browse the site you are agreeing to our use of cookies.Ok