Three players were ejected as a brawl broke out between Florida and Missouri at the end of the first half of the game in Gainesville on Saturday night.

Florida apparently took exception to a hit quarterback Kyle Trask sustained from Missouri's Trajan Jeffcoat on the final play of the half, touching off a wild scuffle that saw multiple punches thrown by players.

Zachary Carter and Antwaun Powell were tossed from the game for Florida, while Missouri saw Tre Williams ejected from the contest. Every player on both teams was also assessed an unsportsmanlike conduct penalty, per the broadcast.

Even the coaches got into it, with Florida's Dan Mullen and Missouri's Eli Drinkwitz appearing to exchange words before engaging in a slightly calmer conversation involving the referees.

Three players were ejected from the Florida-Missouri game following a brawl that unfolded at the end of the first half. pic.twitter.com/GTavCznk6B

Walking off the field with his team up 20-7 after the madness subsided, Mullen briefly came back out to pump up the crowd.

SEC Network says Dan Mullen told them he was trying to get his team off the field. He went after a ref on the field, according to the tape. And then he did this after the field was cleared. pic.twitter.com/PPw1t8kJZy

Supplemental discipline is almost surely coming from the SEC after this brawl. 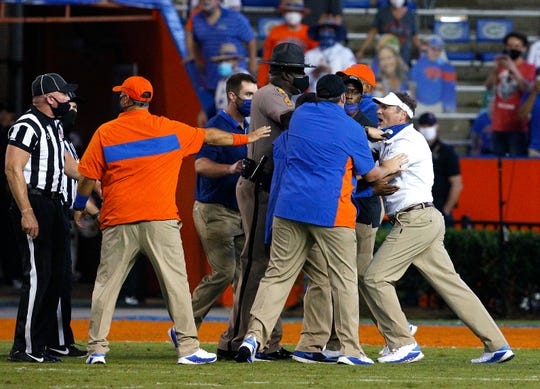 Florida coach Dan Mullen, right, is held back by coaches and law enforcement after a fight broke out at the end of the first half of the game against Missouri. (Photo: Brad McClenny, AP)

Florida, playing its first game since Oct. 10 following a COVID-19 outbreak within the team that included Mullen, plays rival Georgia next week. Missouri is off, but plays the No. 5 Bulldogs in two weeks.

Opinion: What if the Marlins were the Yankees? MLB letting Miami be guinea pigs with COVID-19 outbreak

Kevin Stefanski announces he will call plays for Browns

Jones on Strahan's sack record: 'I don't think that's hard to get'

Kyler Murray is very upset with his low Madden 21 rating: ‘I thought y’all were joking’

Ehlinger, Texas take down No. 6 OK State in OT
D.J. U and Clemson soar, Jim Harbaugh and Michigan stumble, plus more from Week 9
Best News
Recent Posts
This website uses cookies to improve your user experience and to provide you with advertisements that are relevant to your interests. By continuing to browse the site you are agreeing to our use of cookies.Ok