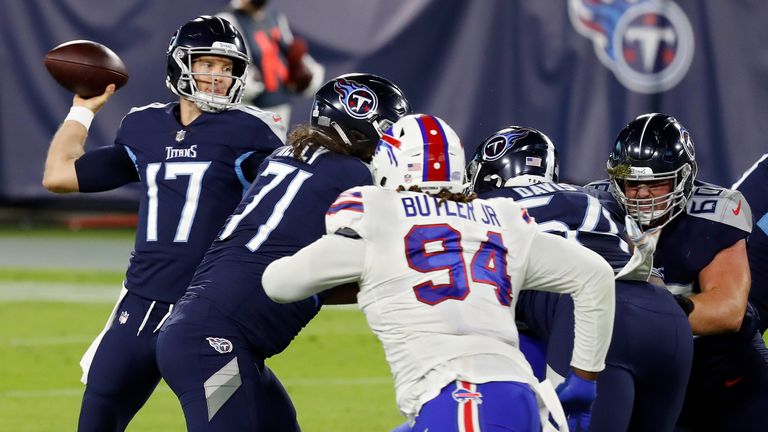 Ryan Tannehill led the Tennessee Titans to just the second 4-0 start in franchise history with victory over the previously unbeaten Buffalo Bills as Week Five came to a close in the NFL.

Tannehill was the star of the show with three touchdown passes and a rushing score of his own as the Titans showcased their all-round value on a first action in more than two weeks following an outbreak of positive coronavirus results at the franchise. 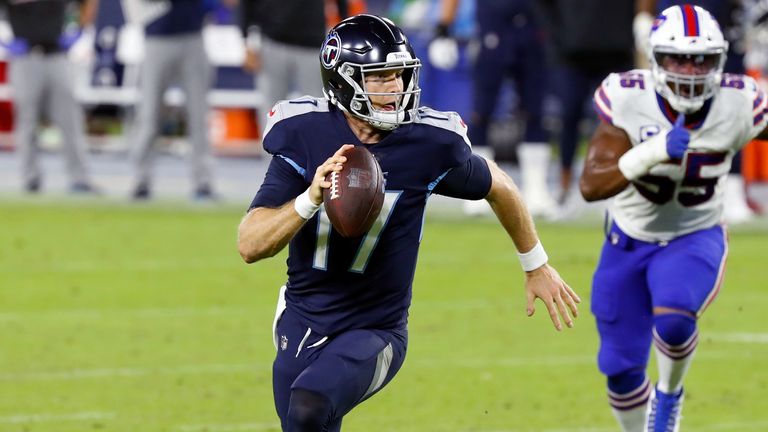 Both teams entered the game with a perfect record, but from the opening drive things went wrong for Josh Allen who was intercepted to set up an early Titans score as the hosts dominated in Nashville to end the Bills own 100 per cent start.

Titans star wide receiver A.J. Brown and left tackle Taylor Lewan were back in the line-up after injury lay-offs. Brown returned with seven catches for 82 yards and a touchdown while Lewan helped protect Tannehill in an efficient performance from the quarterback.

Tonight, the Titans became the first team to score a TD on every red zone possession (minimum 6 RZ drives), have zero turnovers, and allow no sacks since the Patriots defeated the Bills, 56-10, in Week 11 of their undefeated 2007 season

Playing their first game in 16 days after a COVID-19 outbreak that postponed their Week Four home match with Pittsburgh, and saw this fixture pushed back two days from its original Sunday slot, the Titans never trailed and produced their best game of the year to start with four successive wins for only the second time and the first since 2008.

Tannehill threw for three touchdowns in a performance which saw him complete 21 of his 28 passes for 195 yards and no interceptions.

Derrick Henry still managed a pair of rushing touchdowns as the Titans split the running game, with last year’s rushing champion held in relative check by the Bills, who had little to cheer in a disjointed performance.

Allen was picked off after just 91 seconds of the game and went on to add another early in the second half when the Bills trailed by 11 points – and on both occasions he was punished in quickfire fashion by a Titans touchdown. 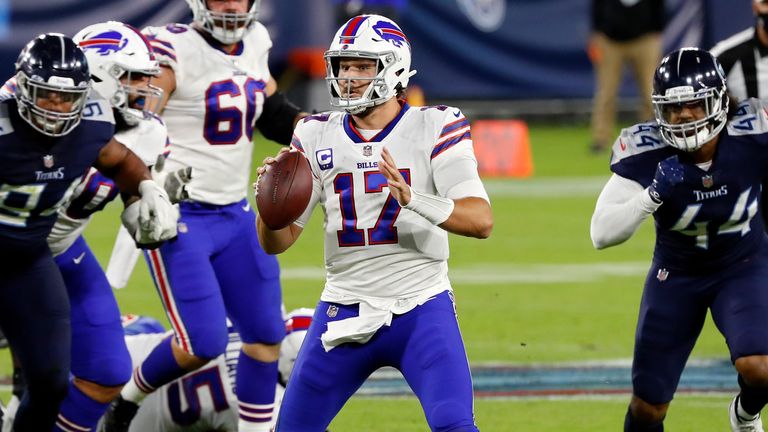 Buffalo also committed 10 penalties for 56 yards in a performance out of character with their start to the season, Allen’s early error setting the done when his third-down pass clanked off the hands of Andre Roberts and into Malcolm Butler’s arms.

A resilient Allen bounced back by leading a lengthy touchdown drive that lasted almost seven minutes, featured 15 plays and moved 76 yards until Isaiah McKenzie finished it by zipping three yards with a shovel pass.

Henry put the Titans ahead with a 1-yard plunge before Tyler Bass’ 43-yard field goal pulled the Bills within a score at 14-10.

Tannehill led a well-executed drive in the final 2:55 of the half, picking apart the Buffalo defense on a 90-yard march and scrambling the last 10 yards himself with 16 seconds left for a 21-10 halftime lead.

Allen was driving the Bills late in the third quarter when he threw Butler a second interception. The 68-yard return to the Buffalo 12-yard line set up Tannehill’s 4-yard scoring strike to Jonnu Smith.

Despite their sloppiness, the Bills and Allen’s struck back. Allen’s 22-yard touchdown pass to T.J. Yeldon with 10 minutes left in the game drew the Bills within touching distance at 28-16.

But Tennessee iced the game with a touchdown drive of 6:03, Henry rumbling nine yards off right tackle for his second score before Tannehill added a 7-yard touchdown toss to Smith at the two-minute warning to seal an impressive night’s work on a welcome return for the Titans.

Week Six gets underway on Sky Sports NFL with a triple header on Sunday, starting with an AFC North rivalry with the Cleveland Browns against the Pittsburgh Steelers – build up begins at 5pm, with kick-off at 6pm.

Tom Brady is not doing what he’s asked, but does the NFL care?

Why Drew Pearson belongs in the Pro Football Hall of Fame

McDermott: Skepticism of Josh Allen 'understandable' until Bills QB 'able to silence that'

Lure Brian Cashman from the Yankees? Why it could be Steve Cohen’s first move as Mets owner

From the warehouse to the Green Monster, the best MLB Home Run Derby moments

Timeline of a collapse: How the Jaguars fell apart on and off field

Chiefs closing in on signing Travis Kelce to long-term extension

New York Jets release star running back Le’Veon Bell after trade talks
COVID-19 forces NFL to keep its options open for remainder of regular season
Best News
Recent Posts
This website uses cookies to improve your user experience and to provide you with advertisements that are relevant to your interests. By continuing to browse the site you are agreeing to our use of cookies.Ok