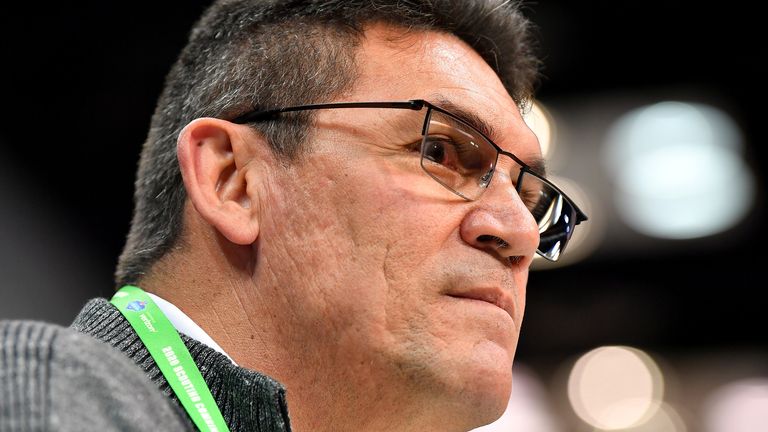 Washington head coach Ron Rivera has been diagnosed with a form of skin cancer.

The 58-year-old is expected to continue coaching while undergoing treatment for squamous cell cancer of the neck after discovering a lump following a self check.

Squamous cell cancer is the second most common form of skin cancer and can spread throughout the body and lead to death if untreated, but if caught early it can be cured.

The head coach shared the news with his team last night but says the cancer is in the early stages and is considered “very treatable and curable”.

We love you, @RiverboatRonHC. We’re all with you, Stephanie, Christopher, and Courtney.

Rivera intends to continue in his role as head coach but went onto say “I was stunned. But I was angry because I feel like I’m in best health I’ve been in.”

“I’m planning to go on coaching. Doctors encouraged me to do it, too. They said, ‘If you feel strongly, do it. Don’t slow down, do your physical activities.’ But everyone keeps telling me by week three or four, you’ll start feeling it.”

New Washington team President Jason Wright has tweeted his support for Rivera, “Adding my prayers for health to the innate strength and deep resilience in @RiverboatRonHC’s body, mind, and spirit.”

The team also sent a message of support via the Washington twitter account adding, “We love you, @RiverboatRonHC. We’re all with you, Stephanie, Christopher, and Courtney.”

Rivera is 76-63-1 as a head coach, all with the Carolina Panthers from 2011-19 and was hired by Washington this offseason to take on a team in transition, both on and off the field.

The club is confronting an alleged culture of sexual harassment, and it scrapped its long time nickname of the Redskins after years of pressure and a building outcry from corporate sponsors.

While Rivera plans to continue in his job, he did say there’s a Plan B in place should the need arise, but he didn’t specify what that would be.

Defensive coordinator Jack Del Rio is the only other coach on Washington’s staff with head-coaching experience, with the Jacksonville Jaguars and then-Oakland Raiders. He was 93-94 as a head coach, 1-3 in the playoffs.

Baseball’s Black pioneers given ‘Tip of the Cap’

Michael Vick turns 40. Here’s a flashback to some his most electric runs in NFL

If the Cleveland Indians change their team name, here are 6 replacement options

Washington coach Ron Rivera announces cancer diagnosis
‘Vintage Kershaw’ will give Dodgers huge boost toward finally finishing job
Best News
Recent Posts
This website uses cookies to improve your user experience and to provide you with advertisements that are relevant to your interests. By continuing to browse the site you are agreeing to our use of cookies.Ok