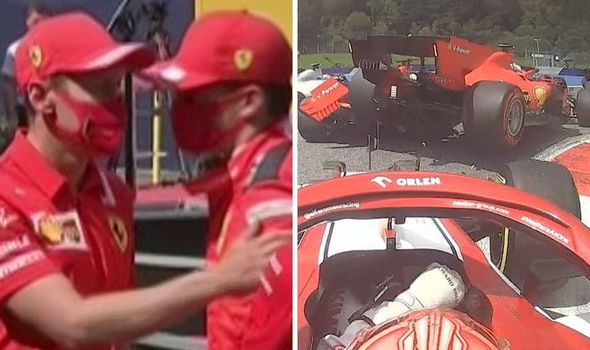 Ferrari had a disastrous start to the Styrian Grand Prix after seeing both Sebastian Vettel and Charles Leclerc clash on turn three on the opening lap. Ferrari had already endured a frustrating weekend with Leclerc qualifying back in 14th and Vettel in 10th respectively.

The team knew there was work to do in the race to fight up the grid.

But the two drivers ended up tangling with each other on the opening lap, with Vettel coming off worse than his team-mate.

The four-time world champion’s car completely lost it’s back wing while Leclerc had damage to his front wing.

Both drivers immediately returned to the pits with Ferrari putting a new nose on Leclerc’s car.

However, Vettel’s car was deemed too damage to repair as they wheeled him back into the garage.

However, Vettel’s car was deemed too damage to repair as they wheeled him back into the garage.

Leclerc though only lasted a few laps before returning to the garage to join his team-mate in retiring from the race.

Replays of the incident showed Leclerc cutting up the inside of Vettel heading into turn three.

Leclerc’s car jumped up into the air though, with his rear left jumping in the air and making contact with Vettel’s car.

Miller second, Vinales forced to bail out in eventful MotoGP

Sebastian Vettel and Charles Leclerc’s Ferrari boss Mattia Binotto makes brutal admission
Sebastian Vettel problem emerges as Mercedes chief Toto Wolff hints at possible link up
Best News
Recent Posts
This website uses cookies to improve your user experience and to provide you with advertisements that are relevant to your interests. By continuing to browse the site you are agreeing to our use of cookies.Ok