Adelaide Crows pair Tyson Stengle and Brad Crouch have been suspended for four and two games, respectively, after they were found in possession of cocaine.

The AFL on Saturday said the players had been found guilty of conduct unbecoming, following the stop and search by South Australian police on September 28.

"Both players will be required to attend a drug and alcohol education course prior to the commencement of the 2021 season and both players' conduct constitutes a notifiable adverse finding under the AFL's illicit drugs policy," an AFL statement read. 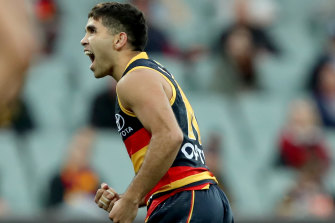 Stengle received a heavier sanction because of a previous incident in April where he was caught drink driving, according to the statement. He was also fined $2500.

"Whilst the present matter is of a different nature, the AFL took account of a relatively recent incident of serious misconduct on his behalf in considering the applicable sanction in this matter," the statement read. 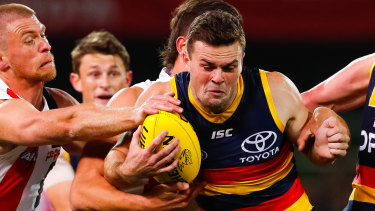 Adelaide accepted the sanction and head of football Adam Kelly said: "We strongly condemn this type of behaviour and Brad and Tyson have not acted in a way that reflects our values."

The club did not stand the players down because their season had ended.

Under South Australian law, a person caught with a small amount of drugs can be diverted into counselling rather than facing criminal sanctions, which is a path open to the players if the facts are confirmed. Adelaide indicated the pair would not face charges.

Crouch is expected to leave the Crows in this year's trade period, likely to a Victorian club.

The players released a joint statement through their management at the time of the incident.

"We unconditionally accept responsibility," said Stengle and Crouch. "We accept that our error of judgment is not in line with community expectations, nor the high standards we set for ourselves. In this regard, we are committed to the counselling process that SA Police has implemented to manage this and will continue to cooperate with our club as required. We will be making no further comments until any club process is concluded."

Pies do enough to shrug off Roos

Young gun repaying Raiders’ faith after disciplinary issues
‘He just charges’: Brad Fittler targets NRL bench star as shock Blues bolter
Best News
Recent Posts
This website uses cookies to improve your user experience and to provide you with advertisements that are relevant to your interests. By continuing to browse the site you are agreeing to our use of cookies.Ok