Argentina beat All Blacks for first time in stunning boilover

After 402 days without featuring in any international rugby, Argentina have beaten the All Blacks for the first time ever in the country’s greatest Test victory of all time.

The stunning 25-17 boilover will live long in the memory of those at Bankwest Stadium and Argentinians all over the world as Ian Foster’s All Blacks were humiliated in a manner rarely seen, orchestrated by Mario Ledesma and Michael Cheika. 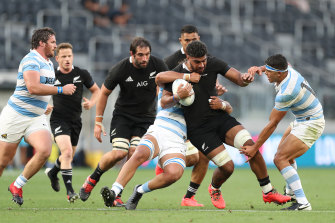 With 28 minutes remaining, the world's 10th-ranked side led the All Blacks and refused to let their foot off the pedal in a result that almost defied belief given what the team has been through in recent months.

A crowd of 9063 was treated to a masterclass from the tenacious Pumas, whose 25 points all came from motivational No.10 Nicolas Sanchez.

His penalty from over halfway with four minutes remaining put the nail in New Zealand’s coffin and sent the Argentina squad, sitting near the field, into pandemonium.

New Zealand started the match as $1.03 near-certainties, yet by the 34th minute they trailed 16-3 after some ill-discipline on their part and lightning quick ball from the South Americans.

The 13-point lead was Argentina’s biggest ever at half-time over the All Blacks – a team they had previously managed only one draw against in 1985. From 29 Tests, the All Blacks had never tasted defeat to the Pumas.

To make matters worse, this was the strongest side the All Blacks could field and superior to the one that fell 24-22 to Australia at Suncorp Stadium a week ago.

Whenever the All Blacks lose a Test, the response is usually swift and brutal. Not today.

In their last eight outings that have come after a defeat, New Zealand have won by an average of 33.3 points.

The only time they didn’t in that period was the final match of the 2017 British and Irish Lions series. 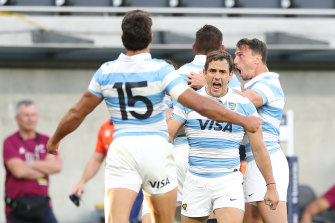 The Pumas had never previously beaten the All Blacks.Credit:Getty

Reaching further into the record books, it has been nine years since New Zealand lost back-to-back Tests, doing so against South Africa and then Australia in 2011.

Television cameras panned to Ledesma, the former Wallabies assistant, grinning at the performance by his men.

Next to him was the man who brought him to Australia in the first place; Cheika.

Brought in as a consultant, it is hard to gauge how much of an impact the former Wallabies coach has had on the Pumas but the result was unexpected in every way possible.

Australia’s coaching staff were parked up in front of a television in the Hunter Valley analysing Argentina, who they face next Saturday in Newcastle.

It will be a seriously tricky assignment if Saturday’s result is anything to go by. Two victories over Argentina in coming weeks would wrap up the Tri Nations.

The Pumas released a fantastic video on the morning of the match, showing how their players had dealt with the COVID-19 lockdown. Some had spent as long as four months in isolation.

From backyard gym sessions, to drills in meeting rooms, to meals in hotel room isolation, this group has gone through it all to make the truncated tournament possible.

So when New Zealand’s Shannon Frizzell stirred up Pablo Matera, the Argentina captain wasn’t going to back down.

“I play for my country. There is no respect,” he told referee Angus Gardner of his opponent early in the match.

New Zealand responded with a try to Sam Cane from a driving maul in the 53rd minute but Sanchez edged the margin back out again, making it 22-10 with just over 20 minutes remaining.

When Matera won a penalty over the ball in the 74th minute, Ledesma knew the job was done as Cheika clapped in delight.

There were tears, and there'll be plenty more this evening.

How Dunkley, Treloar, Dogs and Dons can get done

‘This will be no tea party’: Eddie Jones and Owen Farrell expect Georgia to come out swinging against England
Wayne Pivac insists he can turn Wales’s fortunes around after suffering sixth successive defeat
Best News
Recent Posts
This website uses cookies to improve your user experience and to provide you with advertisements that are relevant to your interests. By continuing to browse the site you are agreeing to our use of cookies.Ok