Mitch Barnett is free to take his place in the opening week of the final series after the NRL couldn’t find evidence to suggest the Newcastle forward racially vilified Gold Coast star Tyrone Peachey.

The NRL has concluded its investigation into the incident, a process that included interviews with players, match officials and club staffers, as well as internal communications records and footage from broadcasters. However, the facts remain contested given there was no evidence to support Peachey or Barnett’s version of events. The players will now be referred to a conciliation process. 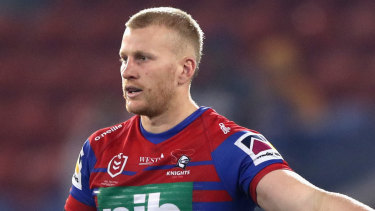 “It is important that every player feels supported when they make a complaint, and we want to see our players take a leadership role in speaking out.

“It is also important that where there is a dispute as to what has been said, the game has a process designed to bring the parties together to address those matters in an appropriate way.

“My priority right now is monitoring the welfare of both players. I’m hopeful a conciliation meeting will find a resolution that benefits both players.”

In a social media post on Saturday, Peachey said he wouldn’t stand for racism.

“I am a proud Wiradjuri man and his comments are not acceptable," Peachey stated in a post that has subsequently been deleted.

"I need to be a role model to young Indigenous kids and for my two daughters and make sure they know it’s not OK to let people say those remarks.

"I know exactly what I heard and that’s why I reacted the way I did.

"It can be put down to ignorance, heat of the competition or lack of education. Either way I won’t stand for it.

"Barnett could have called me anything else and it wouldn’t have bothered me, but for him to say what he said, I want him and everyone else to know that those things are not OK to say."

‘Not the team they were’: Gus writes off Roosters’ three-peat hopes
Bulldogs members pull major power play to oust board trio
Best News
Recent Posts
This website uses cookies to improve your user experience and to provide you with advertisements that are relevant to your interests. By continuing to browse the site you are agreeing to our use of cookies.Ok