Bulldogs chair Lynne Anderson says she is aware of a plot to unseat her at Belmore as the political turmoil ramps up following the ousting of league club president George Coorey.

The drama at Canterbury has taken a fresh twist with a letter being circulated that calls for an emergency general meeting and Anderson and fellow directors Paul Dunn and John Ballesty to be removed from the Bulldogs football club board. 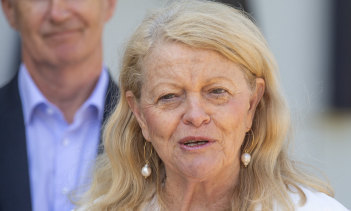 No one has put their name to it but 100 members' signatures would be needed for an EGM to be convened.

If an EGM was forced, the resolutions would then be put to voting members, of whom there are more than 1000. A 75 per cent majority would be required for the directors to be removed.

Anderson said on Sunday she had been made aware of the letter. “I've been sent photos of the announcement [calling] for an EGM," she said. "We haven’t been given any official notification. But of course it is every member’s right to have their say.”

According to a source with knowledge of the situation at Canterbury, there is at least one Bulldogs sponsor among those agitating for change.

The development comes only days after directors of Canterbury League Club ousted president George Coorey following allegations made against him by several women of lewd behaviour.

Dunn, a grand final winner with the Bulldogs in 1988, was installed as the new president of the league club board.

There had been concern expressed last week from Bill Diakos, a member and ally of Coorey, that members could rise up against Anderson’s football club board if a “truce” was not arrived at in the factional warfare behind the scenes at Canterbury. 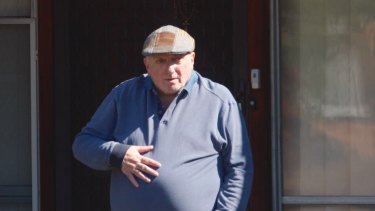 George Coorey remains on the league club board as a director despite being removed as president.Credit:Dean Sewell

Coorey, who will be the subject of an investigation commissioned by the league club, denies the allegations against him and according to sources close to him is furious at Anderson, to whom the complaints made about him were first reported before being revealed by the Herald. A source close to Coorey said he was not behind the letter. Coorey did not return calls on Sunday but has been weighing up a legal challenge to his removal as league club president.

Under Canterbury's constitution, the football club board effectively holds a majority on the league club board, endorsing four of the seven directors. Ballesty, who like Dunn sits on both boards, said last week "Anderson has got nothing to do with this whole situation" with Coorey.

Anderson, the daughter of the late former club patriarch Peter Moore and the chief executive of Paralympics Australia, swept to power in 2018 with around 700 members voting in the election which dislodged long-time chairman Ray Dib.

Anderson was returned as chair at the annual general meeting in February, where the only change to the board was brought about by club legend Steve Mortimer standing down.

Bulldogs chief Andrew Hill and Anderson reported to members last week that the club was headed for a healthy profit this year despite the funding tap from the league club being turned off in March because of the COVID-19 pandemic.

The scrutiny on the board, however, has been intensified not only by the backroom drama but also the club's on-field decline and its recruitment.

The Bulldogs have won only two of 18 matches this season and unless they can leapfrog fellow cellar dwellers Brisbane in the final two rounds they are headed for the wooden spoon.

‘Quite ridiculous’: Fittler’s reality check for Blues hopeful after dig at old club

New Wallabies coach Dave Rennie reveals his squad for 2020 internationals
Carlos Tuimavave signs new four-year Hull FC contract
Best News
Recent Posts
This website uses cookies to improve your user experience and to provide you with advertisements that are relevant to your interests. By continuing to browse the site you are agreeing to our use of cookies.Ok