Sources familiar with the situation indicated Essendon were making a serious pitch for Hind, whom the Bombers overlooked in 2017 and 2018 despite being right under their noses.

Hind, 26, is out of contract, having played 10 matches for the Saints this season but overlooked for selection in the finals. 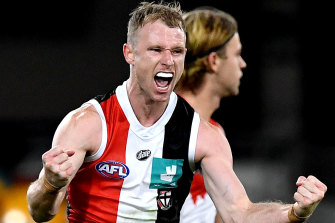 He was plucked from Essendon's VFL team at pick 54 in the 2018 draft after impressing as one of the state league's best rebounding defenders. Hind played 11 AFL games in his first season with the Saints. At AFL level, Hind has been used more as a small forward, kicking three goals and earning two Brownlow Medal votes against Sydney in round nine.

But already only a fringe player on the increasingly deep Saints list, Hind – from Clunes – could be pushed back further in the pecking order should St Kilda land Jack Higgins from Richmond. The Saints have shown significant interest in acquiring the Tigers' small forward.

St Kilda also have a one-year deal in front of Jack Lonie, who has also been considering his options.

The Dons meanwhile could do with an injection of speed given the departure of Conor McKenna and looming exits of Adam Saad and Orazio Fantasia.

Hind could play at either end of the ground, helping to fill any of those respective breaches.

The Bombers have already beaten the Saints to be the preferred destination of out-of-contract Greater Western Sydney midfielder Jye Caldwell, while the Dons remain keen to land contracted Western Bulldogs star Josh Dunkley, who the Dogs insist they will not let go.

St Kilda are yet to submit their offer for restricted free agent Brad Crouch to the AFL. Sources indicated the Saints were considering tinkering with their offer in a bid to boost the chances of Adelaide receiving a top-band compensation pick for Crouch. That would give the Crows pick No.2 in the national draft and mean St Kilda would not have to trade for the 2019 Adelaide best and fairest.

The Bombers have already acquired pick No.7 as a compensation selection for the departure of Joe Daniher to Brisbane and could get another top 10 pick in a trade for Saad to Carlton.

Fantasia looks bound for Port Adelaide in a deal mooted to involve Essendon's pick No.26.

St Kilda have also shown interest in delisted Bomber Shaun McKernan, with the big man in Melbourne's sights too.

Treloar does medical at Dogs, Stephenson talks with North

British and Irish Lions squad: Warren Gatland reveals number of players he will select — so who will he pick?

Match Report – Italy 5 – 34 England
Scotland’s consistency key to impressive Six Nations campaign, says coach Gregor Townsend
Best News
Recent Posts
This website uses cookies to improve your user experience and to provide you with advertisements that are relevant to your interests. By continuing to browse the site you are agreeing to our use of cookies.Ok