The memory is still vivid. I was sitting in the Graham Richmond room at the Richmond Football Club as Francis Jackson, the club's national recruiting manager, took the coaches through the draftees his team had selected in the previous week's 2009 national draft.

He had selected Dustin Martin, from Castlemaine, with pick three. It's always an optimistic time for recruiters, but Francis seemed particularly pleased with himself this year. 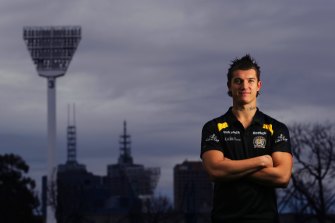 He made three points: 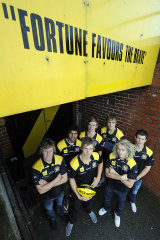 The first two have proved to be absolutely true but it was the third descriptor that I remember generating the most discussion at the time. Leadership is always high on the list of attributes when ranking players, so for Frank to be so candid was interesting.

"Why is that?" someone asked.

"He's different. He's quiet. He's from a unique background. But don't worry, in 10 years' time we wont be talking about his lack of leadership," was the way I remember Francis answering the query.

To have watched Dustin's journey is to see the way football can help and nurture a young person to grow into a man, while fulfilling their sporting ambitions.

Dustin was instantly likable. He was shy and awkward but still, people naturally gravitated to him. And boy, could he play.

His first training session was a sign of things to come. There was a stoppage drill; the ball got hit to him, he pivoted, planted his hand on the chest of a would-be tackler (his arm was much skinnier back then) and dispensed with them before kicking a quaint, perfectly weighted 20-metre left-footer that seemed to nestle into the hands of a leading forward.

You could hear the coaches' brains ticking over.

He was funny and self-deprecating.

The choice of location of his first tattoo was interesting to say the least – his neck.

Exactly seven days after acquiring his new artwork, he walked into my office, sat down pointing to his neck and remarked, "not sure about this". 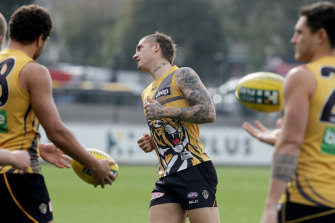 Martin at training in 2014.Credit:Getty Images

In his first three seasons he got better every year. He never missed games and finished top four of the best and fairest. All you want from a top three pick.

The next three years, while the Tigers wobbled a bit, Dustin's football was still at a very high standard, but maybe plateaued a little.

There was a dalliance with leaving the Tigers, including a much-publicised tour of the GWS Giants' facility. The meeting with coach Leon Cameron proved the turning point. The more Leon asked Dustin about Richmond, the more he relaxed. When asked about the people at Richmond, his eyes lit up and he was effusive in his praise. Everyone in the meeting knew where he should be playing his football. By 5pm that night, Dusty was a Tiger again.

There were a couple of issues off the field. I will make comment on only one.

It has been well documented that he had an incident at a Japanese restaurant with some chopsticks allegedly being used threateningly. Once told of the alleged account I tossed it around in my head for a few minutes before it hit me. "He didn't do it," I said to myself.

It's common for anyone who looks like Dustin to be stereotyped. But ask anyone who knows him, he is a teddy bear, and I, like many, just want to hug the man he has become.

Multiple investigations cleared him of the allegation.

A lot of people have helped Dustin become the player and person he is today. Trent Cotchin is one of the more influential. His desire and willingness to help his friend and teammate has indeed aided Dustin to flourish.

What hasn't been considered as much as it might, is the role this has played in Richmond's turnaround and resurgence to be the premier club of the past four years and on the cusp of true greatness.

Dustin and Trent are very different people. A fairly obvious statement. Trent is at home with the white picket fence and family, while Dustin is at music festivals with Dane Swan. 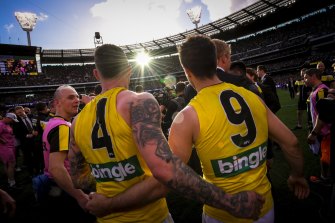 Martin with captain and friend Trent Cotchin after the 2017 grand final.Credit:Eddie Jim

The fact that Trent went to the lengths he did to help the person the most diametrically opposed to his personality showed the whole of the Richmond playing list and the club that they would look out for each other and differences would be embraced.

Like everyone, I constantly marvel at what Dustin does on the field. But it is off the field, and the person he has become, that makes me a little misty-eyed.

He likes to come to Sydney to get away so he, Brett Deledio and I have often find ourselves over a cool beer on a warm afternoon.

The nervous, shy youngster who walked into the Richmond Football Club 10 years ago has been replaced by a quietly assured and confident, extremely respectful young man. He is curious about the world and optimistic about the impact he can have on it.

There is a still a twinkle in his eye, but given all that he has had encountered in life, his mum and dad have every right to be very proud of their son.

He's had to overcome challenges, like a lot of people in life. Most though, don't have to grow up under the spotlight that has shone so brightly on him.

Meditation has taught him to calm his mind so that he feels as calm off the field as what he looks on it.

Tony Greenberg, the lifelong Tiger supporter and media department doyen, this year ranked Dustin ahead of the great Francis Bourke for the first time in a list of the greatest Richmond players. Heady praise indeed, that potentially places only Jack Dyer and Royce Hart ahead of him.

This Saturday, Dusty has a chance at immortality. That may just slide him up two more places. And if he doesn't, it won't matter at all. He's already achieved more than Francis Jackson could have ever dreamed of. With still plenty more to come…

PS – Dustin Martin captained Richmond against Adelaide in round 13 of the 2019 season. How cool is that?

Wayne Campbell is a former Richmond captain and assistant coach.

‘It still rocks me to this day’: Martin reflects on brother’s tragedy

No choking this time at Rebels HQ

‘I know what he’s like’: Norman backs Griffin for Dragons job

Fitzy’s plea to 17yo sporting prodigy

SIR CLIVE WOODWARD: Jack Willis is the complete package!
What channel is Ireland vs Italy on? TV, live stream, kick-off for Six Nations match
Best News
Recent Posts
This website uses cookies to improve your user experience and to provide you with advertisements that are relevant to your interests. By continuing to browse the site you are agreeing to our use of cookies.Ok