Brisbane have created history by claiming an NRLW grand final three-peat against the Roosters 20-10 on Sunday afternoon.

The win was soured by a hair pull from Tarryn Aiken on Roosters player Botille Vette-Welsh, just two weeks after a similar incident rocked the game between Amber Hall and Isabelle Kelly in round three. 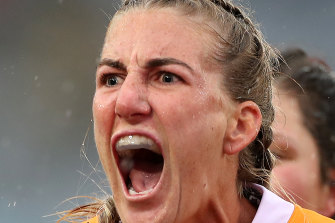 It didn't take long for the Broncos to take advantage of their opponent's struggles, with Aiken putting a pass right to the chest of Tamika Upton to crash over the line just three minutes in.

After the successful conversion, the Broncos continued to take advantage of the noticeable cracks in the Roosters play with Hall smashing through the left edge like a wrecking ball to bag her side their second try.

Hall seemed eager to remind everyone she was back after her suspension period as she helped push the score out to 12-0.

When it felt as if all hope was lost, the Roosters finally managed to switch on via the help of a successful captain's challenge. 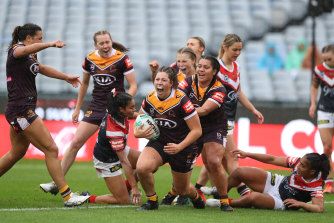 The Roosters took the little win and turned it into a big one with Yasmin Meakes beating defender Julie Robinson to get their first points of the day. Despite a 73 per cent conversion rate this year, Zehara Temara was unable to find the extras with the scoreboard now reading 12-4.

Quincy Dodd proved why she has been one of the most talked-about players of 2020, crashing over the top of a number of girls and finding the try line just five minutes out from half-time.

This time, Temara found the two points and brought her side back into the game heading to go to the break behind 12-10.

Chelsea Lenarduzzi ensured the Broncos don't allow the Roosters to take hold of a second-half comeback and manages a 34 minute try helped along with Hall.

Lauren Brown somehow managed to avoid leaving the field for a HIA after a nasty head knock before it was Brigginshaw's time to shine.

Showing her status as Dally M female player of year, the Maroons skipper set up Tallisha Harden who cruised over the line without a finger on her to make it 20-10 and put her Broncos just 16 minutes away from a three-peat.

It was then that Aiken brought controversy into an otherwise clean game with the hair pull on Vette-Welsh, who was brought into the No.19 jersey after suffering a grade two hamstring strain in the first round. The incident wouldn't derail the Broncos though, who kept up their defence to claim their third straight premiership.

France 38-21 Wales: Dupont picks off Pivac's men as Biggar struggles
TV reporter flees as NRL chaos kills her live cross
Best News
Recent Posts
This website uses cookies to improve your user experience and to provide you with advertisements that are relevant to your interests. By continuing to browse the site you are agreeing to our use of cookies.Ok