Collingwood's star defender Jeremy Howe will play no further part in the Magpies' season, succumbing to a knee injury he suffered in round four.

The Pies had been optimistic that Howe could get back from his ruptured PCL in 2020 but over the past week or two that hope had faded.

On Sunday the Pies officially confirmed those efforts had ended. 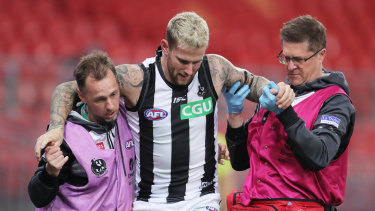 Jeremy Howe is aided off the field with a knee injury during round four. Credit:Getty Images

"Howey, we know, has really run out of time with his serious injury," Collingwood football boss Geoff Walsh said. "He continues to rehab and do quite well but both he and the doctors realise that time has run out for him in terms of him getting back."

The confirmation comes the day after the Pies said Steele Sidebottom would not return to the Queensland hub following the birth of his first baby because of quarantine and logistical challenges.

In better news for the Pies, their young key forward Will Kelly is only one week away from being judged fully fit after suffering an elbow injury.

Chris Mayne (face) is also one week from being available for selection.

Tom Phillips (hamstring) and Flynn Appleby (hamstring) are still two to three weeks away from being available for selection.

The Pies have qualified for the finals and play Port Adelaide on Monday in their last match of the home-and-away season.

NRL: Round 8 team of the week

Leinster 17-25 Saracens: A Goode day for Alex in Champions Cup win
Melbourne’s Harley Bennell investigated for possible COVID-19 breach
Best News
Recent Posts
This website uses cookies to improve your user experience and to provide you with advertisements that are relevant to your interests. By continuing to browse the site you are agreeing to our use of cookies.Ok