It was Alfred Hitchcock who said "drama is life with the dull bits cut out."

The old filmmaker would have enjoyed the shock surprises and suspense of the last round of the NRL, together with the looming intrigue of the first weekend of the play-offs. 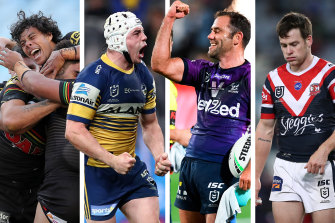 Momentum in the top four is different this year after some teams rested a host of players.Credit:Getty

It is rare for a team to win a grand final without building teamwork and confidence from a month out.

The Storm and Raiders sacrificed momentum in order to rest almost all their top players.
Melbourne, assured of second place, lost 30-22 to St George Illawarra, ending the momentum of four consecutive victories.

Standing down their top team was a bigger gamble for the Raiders. They defeated Cronulla 38-28 but with Parramatta almost losing to Wests Tigers, Canberra could have seized fourth place.

Resting so many players raises the question whether the Storm and Raiders expect to play all four weekends of the finals.

But travel has been a major issue with the Raiders this season. Their match against the Sharks was away, as would have been a play-off with minor premiers Penrith. But fifth place means their replay with the eighth-placed Sharks in the elimination semi-final is at home.

So, the majority of the Raiders' top team stayed in Canberra while the reserves travelled to Sydney, meaning that if they make the grand final again, they will have rested ahead of playing four consecutive finals.

The Storm's decision to stand down 12 players against the Dragons on Sunday was also linked to travel plus a short turnaround. The NRL had not ruled out the Storm playing their first semi-final on Friday night, meaning it was too risky to take the top team to Sydney and return to their Sunshine Coast base ahead of a final five days later.

The Panthers, Eels and Roosters all rested three or four players in the final round, an acknowledgement that in this COVID-19 year, injuries make it difficult to field your top team and maintain momentum.

A two-week preparation to 18 straight rounds, together with fly in/fly out matches, as well as a six-again rule which has sped up play, have contributed to an unusually high injury toll. 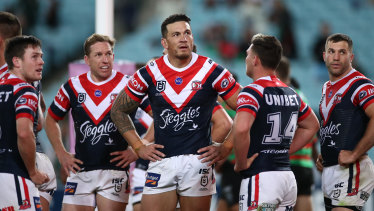 Uncharacteristic? The Roosters are entering the finals on the back of a record loss.Credit:Getty

With no reserve grade competition in 2020, even the Panthers need to give some of the back-up players game experience in case they are needed in the finals.

Coaches also have to consider carry-over points and loadings which can rule a player out of the semis.

Storm coach Craig Bellamy would have preferred his huge forward, Nelson Asofa-Solomona, to keep playing but he has carry-over points and loadings. His height can cause him to mistime a tackle, potentially ruling him out of a crucial match.

As it transpired, the Storm have two forwards facing suspensions out of the Dragons match.

The charge against Max King created some hysteria in the commentary box, setting the scene for a week without Hitchcock's "dull bits". Yet it is unlikely that King would have been included in the Storm's top 17 for Saturday's final against Parramatta.

Hitchcock made great use of "MacGuffins" in his movies, deliberate distractions to the audience which had no real role in the plot.

Expect plenty of MacGuffins this week, which, hopefully, will play no role in the outcome of matches.

Saracens are out to claim another shock against Racing 92

Broncos ‘nightmare’ start before hit back against Melbourne Storm

NRL young gun’s brain cancer miracle
Northampton 14-34 Sale: England duo Tuilagi and Lawes suffer injuries
Best News
Recent Posts
This website uses cookies to improve your user experience and to provide you with advertisements that are relevant to your interests. By continuing to browse the site you are agreeing to our use of cookies.Ok