‘Did they take it up a notch?’: Wisemantel questions All Blacks improvement

Wallabies assistant Scott Wisemantel is demanding better accuracy from Australia this weekend in the third Bledisloe Cup clash and questioned whether New Zealand actually went up a notch in Auckland.

The former England assistant, who helped Eddie Jones mastermind a famous win over New Zealand in last year’s World Cup semi-final, also gave the impression he was far from convinced the All Blacks are the best side in world rugby and insisted Australia hadn’t talked about rampaging winger Caleb Clarke. 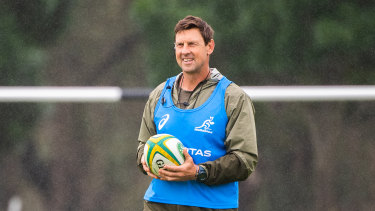 The Wallabies could easily have scored another two tries, with Marika Koroibete held up over the line and Brandon Paenga-Amosa denied a five-pointer close to the line.

“Did they take it up a notch? Or were we inaccurate?

“If you’re inaccurate against New Zealand, who many say are the best team in the world, then you get punished.”

That last line was swooped upon by a Kiwi reporter on a Zoom call, who proceeded to ask the Wisemantel if he felt New Zealand were the best side in the world. 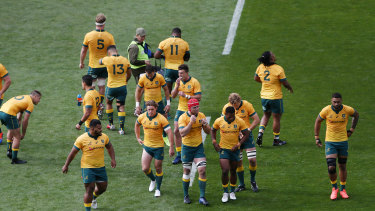 The Wallabies suffered a 27-7 defeat in Auckland in game two of the Bledisloe Cup series. Credit:Getty

“If you look at the rankings, they’re not [No.1],” Wisemantel said. “Do you think they’re the best side in the world? The No.1 team in the world or not?

“I don’t know because South Africa isn’t playing. I don’t do the world ratings, so I don’t know all that works, but I know they’re a damn good side.”

Clarke, the 21-year-old All Blacks winger, was far and away the most lethal player on the field at Eden Park, largely due to the fact Australia were unable to nail their first tackles but also that they gave him time and space through poor kicking options.

Wisemantel said fullback Dane Haylett-Petty and outside-centre Jordan Petaia were fit and firing, with both a chance to come into the starting XV if that is the way Rennie goes when he names his team on Thursday.

Haylett-Petty has been on the injury table, while Petaia came off the bench in Auckland.

“The way we’ve approached it is jerseys are up for grabs, so they have to prove at training they are worthy of the shirt,” Wisemantel said.

“Some of the selections have been based on training performances. When Dave came on he said selection would be based on form.

“Obviously now that Super [Rugby] has finished and they’re not playing games regularly, it has to be training. Shirts have been given out on the basis of training performances. On that basis, it means that everyone is a chance.”

No Plan B leaves Pies vulnerable

‘A weight off my shoulders’: Papley confirms he’s staying with Swans

Barbarians squad who broke Covid rules won't face police investigation
Vizicelo Zondani: South African rugby player dies in illegal game that breached Covid protocols
Best News
Recent Posts
This website uses cookies to improve your user experience and to provide you with advertisements that are relevant to your interests. By continuing to browse the site you are agreeing to our use of cookies.Ok