Brandan Parfitt's manager has ruled out the young midfielder being involved in a trade to bring Jeremy Cameron to Geelong.

Greater Western Sydney declared earlier in the week that they were very likely to match the Cats' offer for restricted free agent Cameron after the 2019 Coleman medallist decided to exercise his free agency rights, requesting a move to Geelong. Should the Giants match the Cats' offer, it would force Geelong into a trade for the Giants' all-time leading goalkicker. 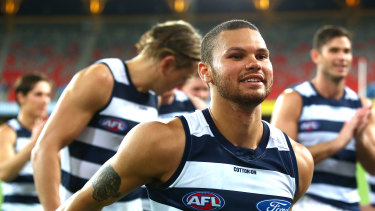 "Brandan is currently contracted to play for Geelong and that won’t be changing. Any other discussion around him being at another AFL club in 2021 and beyond is nothing more than speculation and rumour," Lawrence said.

"Other clubs can enquire about his availability – as is their right – but we will just say no to them anyway. End of story."

The Giants could also look to land ruckman/forward Esava Ratugolea as part of a Cameron trade. Cameron's looming addition to the Geelong side would further marginalise the young big man, who is already on the outer at the Cats but remains contracted for next season.

Of other fringe and contracted Cats, Jordan Clark has been linked to a move back to Fremantle, while Charlie Constable has been starved of opportunities and is conceivably attainable at the right price.

‘Arrogant’ Broncos told to ‘nick off’ after negotiations for $1m star fall apart
The photo Wallabies fans never imagined: Cheika starts with Argentina
Best News
Recent Posts
This website uses cookies to improve your user experience and to provide you with advertisements that are relevant to your interests. By continuing to browse the site you are agreeing to our use of cookies.Ok