The fundamental problem with what has become of the holding-the-ball rule in the AFL is that we're blaming the victim.

The first objective of the game is to get the ball, but we've created a game where the ball-getter bears all the risk. We make the problem for him and expect him to solve it, and to pay the price if he doesn't. It should be that possession is nine-tenths of the law. Instead, it's caveat emptor.

I say we because it's not just the AFL, but coaches, media and public. We all say we admire the player who wins and carries the ball, but it's lip service. 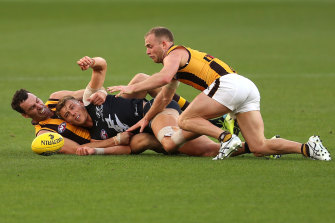 The language is the give-away. The presumption is guilt, not innocence. "He dived on it." "He held it in." "He made no attempt." The most we will allow the player with the ball is grudging: "He tried".

Of course, some players are adept at feigning the necessary effort. This is part of the game's theatre. Sometimes he's believed, sometimes not. But surely the benefit of the doubt should be to ball-winner.

The set against the man in possession extends to other aspects. Deliberate out-of-bounds is one. But making a pernicious return are the several ruses used to delay returning the ball to its rightful owner when a free kick is paid. Commentators call this tactic "professional".

Always, all responsibility falls on the heads of the umpires. To a point, this is only natural: they are the cast fall guys. But they are at risk of being crushed. Prior opportunity has added another layer. It's a loathsome concept anyway – more prior conviction than previous opportunity – and the more the AFL tries to refine it, the more of a hash it becomes.

Umpires cop it, but they're only applying the rules as directed. It's just that we've made so many rules, and interpretations within rules, that they're bound to make mistakes.

For years, the AFL has massaged the rules to try to create a more continuous game. Talk about prior opportunity! It has only half-worked. The game has more flow, but no fewer packs. It has not improved as a spectacle. Some games make for great watching; the game not so much.

Many thought the league should have left the game to sort itself out organically. I was one. But it's going nowhere. And it won't while the cardinal flaw in their thinking rules, laying responsibility for dealing with the milling packs not on the packs, but the man who is trying to break them open.

Warren Gatland: British & Irish Lions head coach on Will Greenwood’s podcast
Featherstone seek talks to replace Toronto Wolfpack in 2021 Super League
Best News
Recent Posts
This website uses cookies to improve your user experience and to provide you with advertisements that are relevant to your interests. By continuing to browse the site you are agreeing to our use of cookies.Ok