A former Essendon director has revealed he has been approached about a board challenge and taken aim at the Bombers' decision to appoint the legendary Kevin Sheedy as a director.

The four-time Essendon premiership coach will officially join the board next week when he replaces the retiring Katie Lio. He will then stand for re-election in December. 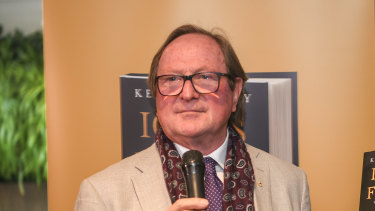 Real estate agent Brad Teal served on the Bombers board for a decade and was a director at the time of the 2000 premiership. He was also there when the Dons sacked Sheedy in 2007 after 27 years at the helm.

While he would not delve into details of who had made the approaches, Teal said on Thursday that he had been sounded out several times in recent weeks as part of moves to unseat the current board, currently led by new president Paul Brasher.

Teal said he had declined those advances, but was disappointed with the decision to appoint Sheedy onto a board which already contained Essendon premiership players Simon Madden and Sean Wellman, suggesting that the decision was made to appease frustrated supporters rather than in the club's best interests.

"I've had my time on the board, and I won't get involved. But I was really disappointed as a life member of the football club to see that Kevin Sheedy was appointed to the board," Teal said on Thursday.

"I was frustrated, no matter how good Kevin Sheedy is to the footy club and how successful he's been, I think appointing Kevin Sheedy to the board was a populist vote rather than a good business decision.

"And the board should be making good business decisions to try and elevate our standing in the AFL. Because in the early 2000s we were relevant, we had an opinion, and our opinion by the AFL was sought. I believe that we've become irrelevant. If you win games, everything follows. Membership follows, merchandise sales follow, sponsorship follows, advertising follows. You're on the back page of the paper for winning games. If you are not, which is what is happening to the football club right now, you self-implode."

Sheedy, 72, had been engaged as a consultant to Essendon's marketing department before his appointment to the board.

Because in the early 2000s we were relevant, we had an opinion, and our opinion by the AFL was sought. I believe that we've become irrelevant.

The Bombers are under siege following the walk-outs of stars Adam Saad and Joe Daniher. Essendon's membership also fell more than 20 per cent this year, well above the competition average.

In better news for the Bombers, sources indicated the re-signings of young guns Jordan Ridley, Andrew McGrath and Kyle Langford are likely to be announced in the coming weeks.

SBW ready to rumble for Raiders clash
Sean Long leaves Harlequins coaching role
Best News
Recent Posts
This website uses cookies to improve your user experience and to provide you with advertisements that are relevant to your interests. By continuing to browse the site you are agreeing to our use of cookies.Ok