Russell Crowe did not like inquiries this column made when we first revealed the breakdown in his relationship with Sam Burgess in November. It was played down by both parties, but I’ve been told communication between the pair has been limited during the past six months. Some say it’s non-existent.

The exact nature of their relationship may emerge if Crowe speaks to those investigating allegations against Burgess. Their relationship certainly wasn’t what it was when the pair embraced following the 2014 grand final. 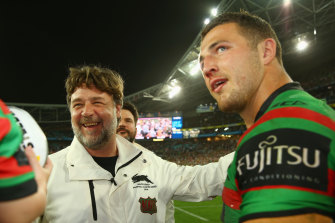 Burgess also had a significant falling out with former Rabbitohs football manager Shane Richardson. Things got very nasty between the pair. Richardson was dealing with an alleged sexting scandal and the breakdown of Burgess’ marriage; nothing like the allegations of domestic violence and drug use levelled at the former star in The Australian recently. Burgess denies the allegations.

Richardson has publicly stated he was unaware Burgess had to be medicated after a drug-fuelled bender, as claimed in The Australian. If Richardson ever tells his side of the story about the relationship breakdown it would make headlines.

Richardson had a fateful warning for Souths chief executive Blake Solly when he left the club earlier this year: he said dealing with Burgess would be his greatest challenge.

There is a growing anger towards Burgess from the Souths hierarchy. They have been waiting for him to clear them of any knowledge of his alleged drug-fuelled binge. That is obviously difficult given Burgess’ court battles. His failure to make any statement has tarnished the club’s brand. 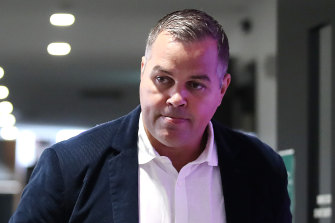 Anthony Seibold flopped as a coach at Brisbane, but he deserves significant praise for his efforts in battling online trolls.Credit:Getty

Plenty of sports fans will tune in for Tom Steinfort’s 60 Minutes story on Sunday about online trolls because two prominent names in rugby league will bare their souls.

The program has conducted extensive interviews with Anthony Seibold and Erin Molan about the horrendous attacks they have had to endure by faceless cowards. Molan has called for the trolls to be jailed. All eyes will be on who was behind the vicious rumours about Seibold and, after months of speculation, the show has promised to reveal intriguing new information.

I’m told the person of interest has links to league. I have also been told that the place of work of this person, who is close to the epicentre of the Seibold rumours, will be made public. The person does work in an official capacity in the sport of rugby league.

Seibold flopped as a coach at Brisbane, but he deserves significant praise for his efforts in this area.

If from a really negative situation there is some legislation change … then I think that’s a fantastic legacy.

‘‘I went through some pretty dark times a few weeks back, because of the amount of hate and defamatory comments that was spread,’’ he tells 60 Minutes. ‘‘And people were happy to spread it. It was crazy, really. And that’s not the Australia that I grew up in.

‘‘If from a really negative situation there is some legislation change and there is some further accountability around using identification on social media accounts, then I think that’s a fantastic legacy to leave.’’

Molan is just as strong in her views on the issue.

Credit where it’s due?

A fascinating spin-off from Zac Lomax’s selection in Brad Fittler’s extended NSW Origin squad is the men he credited for his incredible rise.

He skipped straight past former head coach Paul McGregor and nominated current and former St George Illawarra assistants Shane Flanagan, James Shepherd and Dean Young as the men who set him on the path to Origin. He also said he was excited to play under Anthony Griffin.

‘‘We met him last Wednesday and I have to say I liked what I saw,’’ Lomax said. ‘‘He is straight-up old-school and that has appeal to me.’’

‘He just charges’: Brad Fittler targets NRL bench star as shock Blues bolter
Finn Russell looking to down Exeter with his kicking game
Best News
Recent Posts
This website uses cookies to improve your user experience and to provide you with advertisements that are relevant to your interests. By continuing to browse the site you are agreeing to our use of cookies.Ok