Queensland hooker Jake Friend has spoken about the anxiety he felt while waiting for the results of his latest concussion tests as he prepares to make his long-awaited debut for Queensland in Wednesday's State of Origin opener in Adelaide.

It has been a long wait for the rugged 30-year-old Roosters rake – 263 games and two premierships for the tricolours – but he has yet to take the field for his state. Such has been life behind Cameron Smith, with Friend finally getting a deserved start. 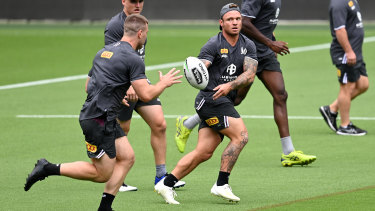 "It was definitely a weight off my shoulders, because you do start to think about it and wonder if you are doing any serious or long-term damage. But there's a brain there and I think it's working pretty well."

Given the lengthy Queensland injury list and the lack of experience in the Maroons side – Wayne Bennett has named eight rookies in his initial 17 – Friend has the quirky honour of arriving as a senior player in Maroons camp, despite have no Origin appearances to his name.

But it's clear Bennett sees him as a key man in and around the team, given Friend's involvement in high-profile NRL games, which Friend believes have given him the perfect insight into how to handle Origin.

"I've been lucky enough to be involved in the finals for the past few years and I suppose there is a similar atmosphere to an Origin," Friend said. "The actual game is something I'm excited about … I enjoy that big-game atmosphere. I haven't played Origin, but I know what a grand final is like.

"For me, I do have to make sure that some of the younger boys in this team don't get too caught up in the week. It's hard … you come into a rep environment without having played a game, but I guess I am a senior player – the hairline shows that.

"But that is going to be a role for me and I'll try to lead as much as I can, whether that's on the field or around the squad."

Friend isn't the most dangerous attacking hooker in the game, but he's the ultimate defensive workhorse and has often sat back and watched draining Origin encounters, which players frequently say test their physical limits beyond any other contest, with envy.

He believes his hard-nosed style of play will be perfectly suited to State of Origin football, which will likely be faster this year in the six-again era, but is certain to retain that testing, physical element.

"As a kid growing up in Queensland, you gather around and watch it with your family and ride every play. I did that all the way through my career.

"We've got a squad here that wants to go and do a job and there are exciting players in this team. This is something I've wanted to do for a long time."

Wayne Pivac says it was an ‘easy call’ to drop George North for Wales’ Six Nations finale
York City Knights: A Super League future?
Best News
Recent Posts
This website uses cookies to improve your user experience and to provide you with advertisements that are relevant to your interests. By continuing to browse the site you are agreeing to our use of cookies.Ok