Simon Goodwin has appealed to the AFL and umpires to better protect his ruckman Max Gawn from off-the-ball attention.

Speaking after Melbourne's win big over North Melbourne – which Gawn missed due to a shoulder injury that he played with the match before against Adelaide – Goodwin said Gawn shouldn't be blocked while a long way off the ball. 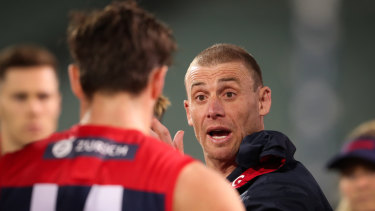 Goodwin was responding to a question about rough treatment Adelaide Crows players gave to Gawn and his injured shoulder in the Demons win prior to the Kangaroos game.

"I think we need to protect the premier players of the game that are just trying to put their skills on show and I hope at some stage that we will enable Max to do that," Goodwin said.

"If you cross the line you’re fit to play … but I think the rule would state that blocking should occur within five metres of the ball. When it’s happening 50 metres, 100 metres, 20 metres, 30 metres, that’s a different kettle of fish for me. That’s what we need to stop, and remove from our game."

The Demons coach said Gawn and Jack Viney (concussion) would be fit for Melbourne's next match against Collingwood.

Goodwin lauded the Demons mature performance without Gawn and Viney, their captain and vice-captain.

"There is a bit of maturity building in our group, the way they went about their footy … I thought our young emerging leaders really stood up and it was a real character victory in the end," he said.

Injuries to Aiden Bonar (shoulder), Jed Anderson (eye), Josh Walker, Robbie Tarrant and Majak Daw (all corkies) left them without rotations in the final term, but Shaw said the Roos "shot ourselves in the foot" in poor second and third terms. 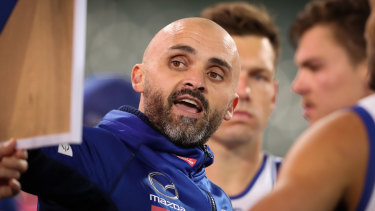 He flagged the rest of the season was about providing opportunities to younger players.

"Our display tonight for the majority of the game wasn’t acceptable. It’s not up to standard," Shaw said.

"The first quarter we had the game on our terms … then we decided to go a different path and Melbourne took full advantage of that.

"In the last quarter we just didn’t have any bodies to do anything.

"We are at a point now where this is unacceptable and it’s not the way that we want to play our football.

"Our members and fans, they need to hear that.

"There are six games to go. We are going to find a lot out about our players and our list."

Knights young guns breach COVID protocols
Match Report – Salford 54 – 18 Hull
Best News
Recent Posts
This website uses cookies to improve your user experience and to provide you with advertisements that are relevant to your interests. By continuing to browse the site you are agreeing to our use of cookies.Ok