In the city of churches, Queensland's hail mary to bring Wayne Bennett in from the State of Origin cold looks a stroke of genius after the master coach inspired an old-fashioned ambush on NSW.

Bennett's overwhelming underdogs, blooding eight rookies after back-to-back series defeats, are 80 minutes away from snapping NSW's recent stranglehold after a miraculous 18-14 win over the Blues in Adelaide on Wednesday night. 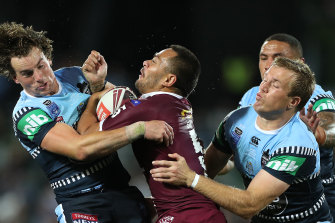 In an Origin series anything but normal – played at the end of the regular season due to the COVID-19 pandemic – Bennett wound back the clock with one of the best coaching displays of his decorated career.

Flanked by assistants Mal Meninga, who led a Queensland dynasty winning 11 out of 12 series, and Neil Henry, Bennett's side fought back from a 10-point half-time deficit to breathe life into a series most thought would be a NSW cakewalk.

The Blues lost Cameron Murray (hamstring) to injury and cleared captain Boyd Cordner to return to the field after a worrying first-half head knock, and they will be forced to quickly pick up the pieces before the second match at ANZ Stadium next Wednesday night.

Cordner, who has suffered a series of head knocks this season, was taken from the field for a head injury assessment after copping an accidental blow from Felise Kaufusi.

If Brad Fittler is to win a third straight series he will need to notch back-to-back victories like last year, only this time one of those matches will be at Suncorp Stadium. The Blues are yet to win in Brisbane under Fittler's reign.

Bennett's faith in a number of untried Origin players was justified, a limping Kurt Capewell, who left the field in the dying minutes, helping inspire the Maroons' rally, while fullback AJ Brimson was a standout alongside the irrepressible Dane Gagai.

And the win came without the injured Kalyn Ponga, Michael Morgan, David Fifita and Moses Mbye. Valentine Holmes was also suspended. He will return for game two.

Bennett started the day a despised outsider and wore only a slightly different shade of hue to Donald Trump, but will wake up in the morning with no doubt about his own result. A man loved and despised in equal measure, Bennett found the numbers Trump couldn't quite muster on the night.

He wouldn't have even been in the stands in Adelaide had his old club, Brisbane, not imploded and turned to Kevin Walters in place of the sacked Anthony Seibold, forcing Walters to relinquish his role with Queensland weeks out from the series.

The skinny coach named a slew debutants for his Origin return, yet had to replace one with another even before kick-off. NRL premiership winner Brenko Lee failed an 11th hour on-ground fitness test on his calf, forcing Titans flyer Phil Sami to be rushed back onto the wing.

Bennett went into the match without a recognised goalkicker who is regularly used at NRL level – and it came back to haunt him when captain Daly Cherry-Evans skewed a simple penalty goal attempt which would have registered the first points.

It was probably the least the Maroons deserved after a promising and bizarre opening, which saw NSW hooker Damien Cook spill Cameron Munster's kick-off.

Cook had a far larger say when he notched first points after his own kick ricocheted back into his hands, allowing him to swivel over the line.

Cordner was assisted from the field after copping an accidental elbow, immediately raising concerns given his history of head knocks this season.

But within 15 minutes the Roosters co-captain had cleared his head injury assessment and had returned to the field, prompting Phil Gould in commentary to claim: "A player with his history, it's a big call".

By then the Blues had padded their lead to 10 points when the outstanding Josh Addo-Carr, still without a definite home at NRL level for 2021, danced over on the unfamiliar right wing.

It's hard to define Bennett's magic, but those closest to him suggest he often does his best work at half-time. His first game back in the interstate arena was no exception.

Somehow, 15 minutes into the second half, Queensland were ahead.

Scolded for their lack of strike out wide, a couple of makeshift centres turned the game on its head.

Capewell first swatted away Clint Gutherson, defending at an unfamiliar role in the centres, and kicked awkwardly for Brimson to land his first Origin try.

Then Gagai brushed past Jack Wighton to set up another rookie, 19-year-old Xavier Coates, to allow the Maroons to surge to an improbable lead, which was extended when Munster toed a loose ball forward and evaded Cook.

Addo-Carr's second set up a grandstand finish, which was made more dramatic when Kaufusi was sin binned with 12 seconds left.

But one man in the stands didn't worry. He'd been waiting for the call for years.

NRL club doctor cautioned by watchdog over Cowboys sex and drug scandal
Rugby Championship: South Africa committed to competition for next decade
Best News
Recent Posts
This website uses cookies to improve your user experience and to provide you with advertisements that are relevant to your interests. By continuing to browse the site you are agreeing to our use of cookies.Ok