Hawthorn free agent Isaac Smith has chosen to move to Geelong, according to a source with knowledge of the player's decision.

The triple-premiership star also had interest from Melbourne, or could have remained at Waverley. 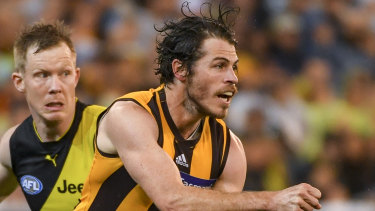 Isaac Smith fires off a handball for the Hawks.Credit:Eddie Jim

Snapshot: The funny man getting former Magpie Swan through lockdown

LISTEN: Pat Lam on the Will Greenwood podcast

Team of the week: The stand-out Super League, Challenge Cup and NRL performers

RFU announces annual loss of £10.8m and finishes year with revenues £23m behind budget
Premiership-winner Josh Addo-Carr refuses to rule out a return to Melbourne as he edges closer to signing with a Sydney club
Best News
Recent Posts
This website uses cookies to improve your user experience and to provide you with advertisements that are relevant to your interests. By continuing to browse the site you are agreeing to our use of cookies.Ok