How SBW helped to convince Suaalii to become a Rooster

Sonny Bill Williams has emerged as a key figure in a meeting that convinced Joseph Suaalii that his future lies with the Roosters rather than with arch rivals South Sydney.

The Roosters are poised to sign Suaalii on a three-year deal from 2022 onwards once the November 1 transfer deadline ticks over. The deal, which includes the controversial get-out clauses that proved a sticking point in negotiations with the Rabbitohs, is worth about half as much as he could have earned had he recommitted to Souths. However, the 17-year-old wants a move away from all the hype that has surrounded him at Redfern. 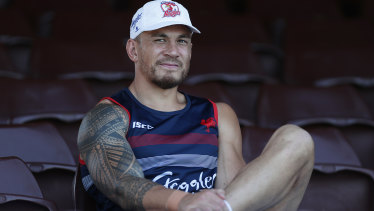 Himself the subject of cross-code wars for much of his career, Williams spoke to Suaalii about his own experiences and explained why the Roosters would be the perfect fit. While Williams has likely played his last game for the club – he hasn't officially indicated whether he will retire – the former All Blacks was only too happy to provide career advice and extol the virtues of the Roosters to one of the brightest prospects in either code.

Suaalii was also told he would be groomed to become the long-term replacement for James Tedesco when the NSW and Australian fullback eventually retires.

The King's School student left the meeting impressed with all he heard and is now ready to commit to the club.

The Roosters were prepared to allow get-out clauses into the contract that would allow Suaalii to switch codes, in the belief he won't want to activate them once he settles in at the club.

Suaalii's decision to choose the Roosters over the Rabbitohs has been a talking point even in Blues camp.

"I actually asked the [Souths] boys about him the other day," NSW and Roosters pivot Luke Keary said. "He obviously wasn't there through the year but they had him during pre-season."

"I've only seen glimpses of him at training but from what I've seen, he's an impressive young kid," Walker said. "He's got an athletic type build, he's got a huge future in whatever game he picks."

Six Nations: Gael Fickou on France wing for Ireland clash
RFU announces annual loss of £10.8m and finishes year with revenues £23m behind budget
Best News
Recent Posts
This website uses cookies to improve your user experience and to provide you with advertisements that are relevant to your interests. By continuing to browse the site you are agreeing to our use of cookies.Ok