Attacking the football will be Richmond forward Tom Lynch's only objective against Geelong in Saturday's grand final as he attempts to help the Tigers to back-to-back flags in just his second season at the club.

The 27-year-old conceded vision of him putting his knee on St Kilda opponent Dougal Howard's neck in the semi-final, when the Saint was lying on the ground, "wasn't a great look for the game" but he is not about to curb his aggressive approach. 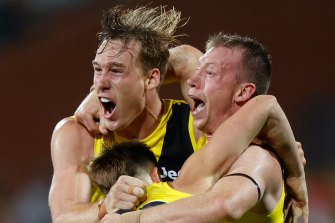 Lynch, subject to fierce public scrutiny in 2020 after the MRO fined him five times for a series of off the ball incidents, has been repeatedly and vigorously defended by his coach Damien Hardwick but he admitted he would rather be seen solely as a player who attacked the ball hard.

"I don't want to be portrayed as that. I didn't actually realise I [put my knee on Howard] on the day. People probably won't believe me but that doesn't really matter, these things happen," Lynch said.

"You are pretty focused on the footy and going hard at the footy so sometimes small things may bob up."

He said he played his best footy when he launched at the football in the air and that would not change despite the commentary targeting his approach.

Lynch said no one goes out of their way to be disliked but often there was little a footballer could do to change opinions so it was important he listened to those who cared about him most.

He said although some of the incidents had been overblown in his opinion he had maintained perspective about the criticism given what was happening in the world.

"It's been a challenging year for everyone. Everyone has had their challenges this year in every walk of life," Lynch said.

Lynch expects to play on veteran Geelong defender Harry Taylor having matched up against him in recent battles, with the Tiger kicking five goals on him in last year's preliminary final. 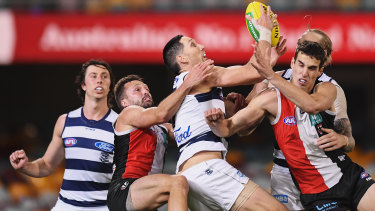 Taylor, 34, said he would relish the chance to play on him again in such a big game.

He borrowed baseball terminology to describe Lynch as a "five-tool player", meaning he was elite in more than one area.

"He can do everything that you require of a forward … kicks goals when he needs to, takes a good mark, puts defensive pressure on.

"In baseball, sometimes they talk about hitting with power, hitting to position and they're also great fielders and he sort of reminds me so much of a five-tool, in terms of all the things he brings to their forward line."

The Cats' dual premiership player was key in the 2009 premiership when he played on former Saints star Nick Riewoldt and kept him relatively subdued, taking a vital mark late in the game when the Saints were pressing.

He also took on Hawks forward Jarryd Roughead in the 2008 grand final and played on Collingwood's Travis Cloke in the first half of the 2011 grand final before Tom Lonergan moved on to him.

Lynch, who performed well in last year's finals, said although the Tigers didn't want to overstep the mark on Saturday and give away 50-metre penalties unnecessarily, he expected the battle to be fierce.

"When two sides are going pretty hard at it as they were on the weekend you are going to get a slip up in a tackle every now and then," Lynch said.

Woeful Wallabies cop the ultimate insult
England attack coach Simon Amor rules out a return to Sevens
Best News
Recent Posts
This website uses cookies to improve your user experience and to provide you with advertisements that are relevant to your interests. By continuing to browse the site you are agreeing to our use of cookies.Ok