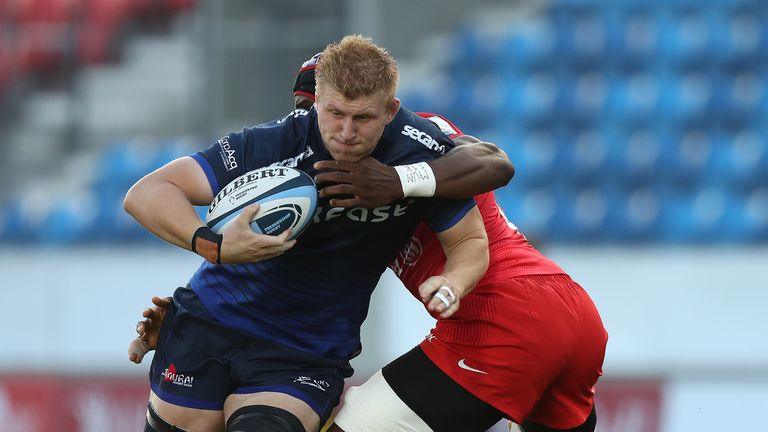 Sale made it four Gallagher Premiership wins in a row for the first time since February 2016 with a 24-17 success over Saracens at the AJ Bell Stadium to stay on course for the play-offs.

Steve Diamond’s men had the game sewn up by half-time when they led 21-7 and, although the bonus point eluded them, the result was enough to keep them in pole position for a second-place finish.

With Wasps and Bristol earlier gaining handsome wins, defeat was unthinkable for Sale and, with home advantage in two of their last three fixtures of the regular season, their destiny remains firmly in their own hands.

Diamond made 11 changes to the team that beat Leicester last weekend for their sixth game in 27 days and stand-in captain Ben Curry led them superbly against the fallen champions, who suffered a seventh defeat of the season.

In the absence of England captain Owen Farrell, McCall gave fly-half Manu Vunipola, the 20-year-old cousin of Billy and Mako, a chance to impress ahead of Sarries’ European quarter-final against Leinster in Dublin on September 19.

Farrell was given a five-match ban after being sent off against Wasps at the weekend for a high tackle on Charlie Atkinson.

Sale started strongly with a charging run from hooker Curtis Langdon set up the position from which lock Matt Postlethwaite was driven over for the opening try.

But the Sharks made a hash of the restart and, after Scotland centre Duncan Taylor, on his first appearance since February, pounced on the loose ball, fly-half Manu Vunipola chipped over their defence for winger Rotimi Segun to touch down wide out for the first of his two tries. Vunipola levelled the scores with the conversion but the home side went on to dominate the rest of the first half, thanks largely through their formidable scrummaging which gave scrum-half Will Cliff all the time he needed to bring his backs into action.

Sale won three successive scrum penalties as Saracens tested the patience of referee Craig Maxwell-Keys and the pressure paid off when prop Valery Morozov was driven over for his side’s second try.

Full-back Simon Hammersley then added a third try on 26 minutes after winger Tom Roebuck had been brought down short of the line and fly-half Rob Du Preez, who was wide with an early penalty, kicked his third conversion to make it 21-7, which was the half-time score. Saracens raised their level in the second half and a Taylor turn-over on halfway created the position for a spell of sustained pressure.

Lively hooker Tom Woolstencroft went close but the Sale defence held firm and lock Joel Kpoku was held up over the line.

‘Don’t be coming at my mates’: Haas and ex-Bronco in bitter spat over Croft’s ‘crocodile tears’

Super League: Thursday’s talking points and team news
‘Narrow focus’: Worsfold fires back at Lloyd, Bombers’ critics
Best News
Recent Posts
This website uses cookies to improve your user experience and to provide you with advertisements that are relevant to your interests. By continuing to browse the site you are agreeing to our use of cookies.Ok