The AFL is aware of a possible breach of its coronavirus rules by Melbourne player Harley Bennell.

An AFL spokeswoman confirmed the league had been notified of Bennell's alleged behaviour, which sources indicated involved him leaving the Queensland hub and potentially engaging in unauthorised conduct. 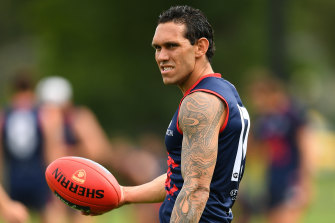 The Demons reported the possible breach and are waiting on the AFL integrity unit to complete its investigation.

Bennell was not part of the Dees' squad for Saturday's match against Essendon on the Gold Coast.

"The Melbourne Football Club is aware of a potential breach of the AFL's COVID-19 protocols involving player Harley Bennell," the Demons said.

"The club has notified the AFL, who are investigating the matter.

"Whilst the club and the AFL are in the process of establishing the facts, Harley will remain in an off-site isolation location, to remove any possibility of contaminating the Twin Waters high performance hub.

"As the matter is being investigated, the club is not in a position to comment further."

Collingwood officially rule Jeremy Howe out for the season
Ricky Stuart blows up after star’s blunder
Best News
Recent Posts
This website uses cookies to improve your user experience and to provide you with advertisements that are relevant to your interests. By continuing to browse the site you are agreeing to our use of cookies.Ok