New honours and a ‘bub in the hub’ fires up Saints

St Kilda has had a week to celebrate both on and off the field.

As they prepare for their first finals appearance in nine years, midfielder Jack Steele became the first Saint since Nick Riewoldt in 2014 to make the All-Australian side while captain Jarryn Geary and wife Emma welcomed a new son into the world.

Steele was beaming about the change of fortunes for the club in 2020 with new coach Brett Ratten and his side preparing to face the Western Bulldogs in an elimination final next Saturday. 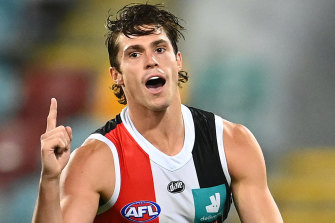 "Going back three years ago, if you told me I was going to be in the All-Australian side I probably wouldn't have believed you," Steele said.

Steele was rested from match simulation on Friday although he joined Tim Membrey, Hunter Clark and Jack Lonie for a running session.

"I've played every game this year so I suppose it has taken a little bit of a toll on the body," Steele said.

"It's just general soreness. Today was a good session, still got a lot of kilometres in the legs. I'm just excited to feel fresh for next week and have a crack."

Geary's new arrival and the return of fitness of midfielder Zak Jones should help the Saints focus on their elimination final.

"It will be exciting to have a new little bub in the hub next week," Steele said.

"It couldn't have been better [timing wise]. I'm sure he [Geary] is happy he came now and not an hour before the game next week."

Jones completed training after hamstring issues and Steele admitted someone undeserving will have to be left out next Saturday.

"Jones is definitely in our best 22 going forward so it's a tough call for Ratts and the coaches to make," Steele said.

"I'm sure they will make the right one. It will be good to have him back in the side."

Humiliating image sums up Brisbane Broncos’ sad demise
Daniel encourages helmet use as Bulldogs consider options for injured Naughton
Best News
Recent Posts
This website uses cookies to improve your user experience and to provide you with advertisements that are relevant to your interests. By continuing to browse the site you are agreeing to our use of cookies.Ok