The doctor for the North Queensland Cowboys has received a provisional caution from the medical regulator over a bombshell complaint from a man who claims he was given prescription medication from a club official to help him sleep after he discovered his wife had engaged in sex with a star player in an airport toilet cubicle.

The development comes as the National Rugby League’s integrity unit finalises an investigation into the explosive allegations, with findings expected to be announced by early next week. 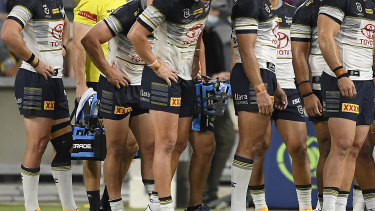 The North Queensland Cowboys are under the microscope of the NRL integrity unit.Credit:Getty

NSW State of Origin team manager Peter Parr, who until recently was Cowboys football manager and was last month appointed to the NRL team’s board, was a central character in the complaint lodged by the angry husband.

Mr Parr, who will fly to Adelaide with Brad Fittler’s Blues squad on Wednesday for the first match of this year’s Origin series, admitted providing Valium to the man on September 5, 2018 to help him deal with the stress of finding a message from the player to his wife, a Cowboys employee, about their sexual encounter at Brisbane airport on the way back from an NRL game that year.

However, there is a significant disparity in the version of events provided by Mr Parr, Cowboys and Australian Kangaroos national team doctor Chris Ball and the complainant.

Mr Parr has said the tablets were not his and he did not know they were Valium, instead explaining he had visited the home of Dr Ball to get something to calm down the distressed husband, who was at Mr Parr’s house. 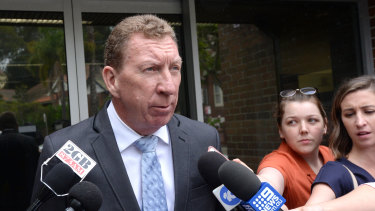 After the husband, a truck driver, subsequently tested positive for benzodiazepine in a workplace drug test, Dr Ball issued a medical certificate for the man’s employer claiming he had personally consulted with him that night.

The husband, however, denies ever meeting Dr Ball, or that Mr Parr left his house in Townsville to drive to the doctor’s home to retrieve the medication. 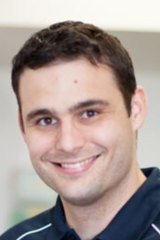 The NRL integrity unit interviewed the husband on Monday, having spoken to Mr Parr late last month. According to NRL sources Mr Parr is likely to escape significant sanction despite conceding he should have informed the integrity unit that Dr Ball was under investigation over the episode by the Australian Health Practitioner Regulation Agency.

Sources say the NRL and the Cowboys have been notified that Dr Ball had since been handed a provisional caution by the medical watchdog to which he can respond.

It was not clear whether the caution, the lowest level of sanction dealt out by AHPRA, related to the providing of the drugs without a written prescription, the medical certificate or both.

Contacted on Tuesday, a spokesperson for AHPRA said the agency “can’t disclose information about an individual practitioner unless it is in the public domain, unless that practitioner consents to us releasing information”.

The spokesperson said “a caution is like a written warning and is intended to act as a deterrent so that the practitioner does not repeat the conduct or behaviour. A caution is not usually recorded on the public register”.

Dr Ball did not return a phone call and text message from the Herald on Tuesday and the NRL and the Cowboys declined to comment about the club doctor.

The NRL has defended itself from suggestions it sat on the complaint, which was sent to the integrity unit in October 2019 by his lawyer John Sneddon, for nearly a year.

The governing body claims the integrity unit sent emails to the husband on six occasions between November last year and March seeking his consent for them to contact medical authorities about his case and in an effort to gather further documentation.

According to the NRL he did not respond and provide that consent until recently and the integrity unit’s “long standing practice is not to intervene where investigations are being conducted by external agencies such as police or statutory regulatory bodies”.

Mr Sneddon disputes that the husband’s lack of cooperation was responsible for the delay, saying an investigation was only launched last month following revelations that South Sydney club doctor Andrew McDonald injected a drug-fuelled Sam Burgess with a tranquiliser in 2018 after filling out a prescription in the name of the player’s father in law.

Get our Morning & Evening Edition newsletters

The most important news, analysis and insights delivered to your inbox at the start and end of each day. Sign up to The Sydney Morning Herald’s newsletter here, to The Age’s newsletter here and Brisbane Times‘ here.

NRL 2020: Clubs searching for numbers as injuries hit the NRL

‘Not time to be picking favourites’: Brad Fittler’s warning to Broncos over Kevin Walters

‘What else do we use?’: Ella calls for common sense on Aboriginal flag ban

Super League: New play-off structure announced and end of regular season brought forward
Hail Benny: Maroons ambush Blues in Origin stunner
Best News
Recent Posts
This website uses cookies to improve your user experience and to provide you with advertisements that are relevant to your interests. By continuing to browse the site you are agreeing to our use of cookies.Ok