The Penrith Panthers have reached out to the European cybercrime unit that assisted former Brisbane coach Anthony Seibold to find out the origins of a social media rumour threatening to derail their season.

The rumour, which questions the integrity of several of their star players and at least two staff members at the club, has been circulating among media for a month. The accusations relate to a former female staff member and alleged sexual relationships during her time at the club, with the Panthers planning on involving the police. 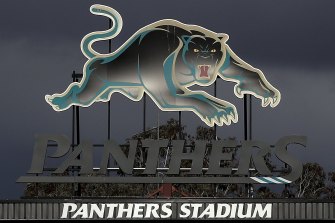 The Penrith Panthers have called in the experts to track down the origin of a rumour that has angered many at the club.Credit:NRL Photos

The rumour mill went into overdrive last week on social media, with the club on Tuesday made aware of a text message that had also begun circulating. Furious Panthers chief executive Brian Fletcher has sought legal advice on behalf of the club and has made contact with the same cybercrime investigation squad engaged by Seibold last month.

"Panthers have been made aware of false allegations circulating on social media alleging inappropriate relationships between a former staff member and current staff members," the club told the Herald.

"The allegations are untrue. Panthers have instructed their lawyers and are also retaining cyber investigators to trace the source and sharing of the allegations and to apply the full force of the law including reporting the matter to the police. No further comments will be made until the investigations have concluded."

As with the Seibold case, there are some at the Panthers who believe the origins of the rumour may be linked to someone with strong ties to the sport. Seibold handed the findings of his investigation to the NRL earlier this month, but the governing body wasn't provided enough evidence to take it further.

The European cybercrime unit, which uses ex-army professionals with expertise in the area, provided a list of names to police and the NRL after Seibold became the victim of a brutal social media attack against him and his family. The accusations against Seibold were of a different nature and he has vehemently denied them.

The Panthers, who were first made aware of the rumour last month, recently notified the NRL because one of the claims involved an alleged COVID breach. It is understood the NRL was satisfied that the club had not broken any of the code's strict biosecurity measures.

James Maloney has responded to NRL return rumours. And it’s not what Broncos fans wanted to hear

KFC SuperCoach NRL: Who will claim the $50,000 first-place prize?
Penrith Panthers follow Anthony Seibold’s lead as rumours spread
Best News
Recent Posts
This website uses cookies to improve your user experience and to provide you with advertisements that are relevant to your interests. By continuing to browse the site you are agreeing to our use of cookies.Ok