Panthers players have expressed their "disappointment" after almost losing to the Roosters on Saturday night, with the side ramping up training during their rest week as a result.

Panthers prop Zane Tetevano, who is gunning for a third straight premiership after moving from the Roosters last year, said the players found it hard to celebrate the win and simply "looked at each other" when walking into the dressing room post-match. 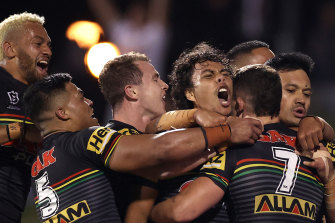 The Panthers will work on defensive work over their rest week.Credit:Getty

Tetevano is one of the few in the squad with finals experience.

The 29-year-old was part of the Roosters' 2018 title win before being gifted Trent Robinson's premiership ring in 2019 after missing out on the team's top 17.

While he is trying to not get ahead of himself, Tetevano said it was hard not to "visualise" a third premiership.

"I passed my '18 one off to my grandfather who passed away back in 2018 which I'm proud of, and in 2019 my coach Trent Robinson gave me his ring," he said. "This one will be very special to me, so I'm looking forward to it, but I don't want to look too far ahead.

"Although I've been a part of a couple of finals series I still get nervous so I don't know how to get past it – you just have to help each other out."

Dylan Edwards said the players knew what they "lacked" over the weekend and were eyeing the Rabbitohs as huge competition.

"They [the Rabbitohs] have hit their straps at the right time of the year and they are putting the scores on anyone they play at the moment," he said.

Edwards labelled them "a very dangerous side" and was all praise for Cody Walker.

"Everything he touches turns to gold at the moment and he's playing well and playing off the back of good momentum that the team is playing with," he said. "It will be interesting in how Parra handle them."

The minor premiers will be looking to improve their defensive work over the rest week as well as their overall starting power.

‘Nothing sinister’ in Coniglio axing, skill errors to blame for GWS failures: Bartel

Australia to replace New Zealand as host of the Rugby Championship

Explosive teen McKenzie tipped for Tigers selection
Team of the week: The stand-out Super League, Challenge Cup and NRL performers
Best News
Recent Posts
This website uses cookies to improve your user experience and to provide you with advertisements that are relevant to your interests. By continuing to browse the site you are agreeing to our use of cookies.Ok