Geelong will carry no demons from past preliminary final failures into their clash against the Brisbane Lions at the Gabba on Saturday night, with versatile ruckman Mark Blicavs saying they will "try to take the game on" to overcome the hometown heroes.

Blicavs and champion midfielder Patrick Dangerfield have won each of the past five Geelong best and fairests, and are the only two current players to have played in four losing preliminary finals without making a grand final. 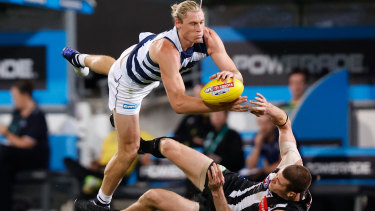 Rough and tumble: Mark Blicavs collides with Magpie Mason Cox during Geelong’s emphatic semi-final win over Collingwood at The Gabba.Credit:Getty

If the Cats lose to the Lions they will join former players Brad Johnson (Western Bulldogs) and Matthew Clarke (Brisbane and Adelaide) as the only players to have played in five preliminary finals without reaching a grand final.

However Blicavs is taking both good form and a positive approach into the match, saying his preparation will not vary despite the obvious importance of the clash.

"It's a great opportunity that we have got in front of us and I am very excited about it. I am very motivated for it," Blicavs said.

"The prelims I have been involved in have been disappointing, in that we have lost. You hope that you learn lessons from each one and that you get better for the next one."

Blicavs, 29, was playing just his 22nd game when he played his first preliminary final which the Cats lost to Hawthorn by five points after leading by 20 points at three-quarter time.

They were then blown away early in the 2016 and 2017 preliminary finals. In 2019 they gave up a 21-point half-time lead against Richmond to lose a hard-fought encounter that saw the margin at just four points, eight minutes into the last quarter.

"I'd like to think in each one of those, especially last year against Richmond, that you learn lessons," Blicavs said.

"We will try to take the game on next week and obviously the goal is to make the grand final, but Brisbane are going to be a very tough opponent."

"When you work so hard and you get so close and you don't get to make it to the final step it is hard," Blicavs said.

"The positive is that we have been able to learn from that and not shy away from that."

Blicavs is again one of the reasons Geelong find themselves in their ninth preliminary final since 2007 having made the All-Australian squad after switching back into the ruck mid-season supporting Rhys Stanley from the wing.

His defensive transition is elite with his running blocking opposition avenues to goal and his marking in defence a highlight of his semi-final against Collingwood. He also spreads hard and fast to find space on the fat side of the ground to provide an option for the Cats when they switch play to move the ball out of defence.

Blicavs says he has enjoyed playing the same role week to week after the Cats returned him to that role in last year's finals series after he had played full back most of the season.

The re-emergence of veteran defenders Lachie Henderson and Harry Taylor in defence has allowed the Cats to use him in a more destructive manner.

"I have enjoyed being around the ball or getting that first opportunity doing a centre bounce or at a stoppage to help, right at the source, getting the ball going your way. I have enjoyed that responsibility," Blicavs said.

Now he enters the preliminary final knowing what's ahead, alongside great mates Cam Guthrie and Jed Bews, who like Jake Kolodjashnij, Sam Menegola, Lachie Henderson and Rhys Stanley have played in three preliminary finals apiece, without progressing to a grand final.

Finn Russell looking to down Exeter with his kicking game
‘What it’s all about’: Teams share Bledisloe beers after rugby classic
Best News
Recent Posts
This website uses cookies to improve your user experience and to provide you with advertisements that are relevant to your interests. By continuing to browse the site you are agreeing to our use of cookies.Ok