There have been concerns for some time about the way Sam Burgess – former South Sydney Rabbitohs captain and hero of the 2014 grand final win – had been living his life in retirement.

A few months ago, he stopped working for Fox Sports amid rumours about his lifestyle and joined Souths players and coaches in their biosecurity bubble. Burgess had been given a chance to straighten himself out, appointed to the coaching team and mentored by one of the game’s most respected figures, Wayne Bennett. He looks so fit that there has been speculation about a playing comeback. 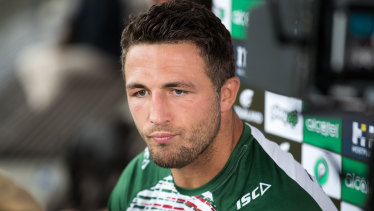 The NRL and the NSW Police will investigate the allegations against Burgess.Credit:Janie Barrett

The culture of football clubs is to protect their own. Some are afforded more protection than others, with premiership-winning superstars like Burgess given more rope than the lesser names in the squad.

And that’s why Burgess wasn’t the only one ducking for cover on Friday. There are wider implications for his club and the code. Souths stand accused of covering up his destructive behaviour, including complaints from a Melbourne woman who he allegedly abused when he called off their extramarital affair in late 2017 at the Rugby League World Cup. 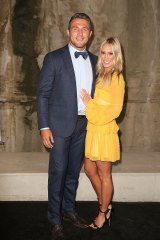 The NRL Integrity Unit is adamant it wasn't aware of those claims, in which Burgess allegedly told her, "You are f…ing dead" after she refused to take his calls.

What, if anything, did chief executive Blake Solly know about all this? What about chairman Nick Pappas, who is a respected lawyer? Former coaches Michael Maguire, Anthony Seibold and, now, Bennett?

And what of co-owner and father figure Russell Crowe, to whom Phoebe Burgess alleges she sent text messages after her husband went missing for two days after Souths lost the 2018 preliminary final to the Roosters.

It's not commonly known that Crowe and Burgess have barely spoken for months after a falling-out last year when Burgess blasted the NRL judiciary as a “kangaroo court” following a string of on-field indiscretions.

It is a far cry from the jubilant scenes of the pair hugging each other after Burgess led Souths to victory in the 2014 grand final against the Bulldogs.

It’s even further from the glamorous early days of the couple’s courtship, when they graced the red carpets at Dally Ms and corporate suites at the races in style.

This column’s phone didn’t stop ringing on Friday but no calls were returned by some of the people we most wanted to hear from. Crowe did not respond to the Herald’s emails and South Sydney only issued a banal statement late on Friday. Burgess declined to comment when contacted by the Herald.

Those close to him say he is shattered by the claims he crushed his heavily pregnant wife while on a drug-fuelled bender in November 2018 that only stopped after Souths doctor Andrew McDonald injected him with liquid Valium.

The Burgess camp considers the story an attempt to stop him ever seeing his children again.

One of the authors of the 3000-word story, Walkley Award-winning journalist Sharri Markson, was once Phoebe Burgess’ editor at Cleo magazine.

But recent legal wranglings between Burgess, his ex-wife and her father, Mitchell Hooke, reveal the hostilities between the parties are increasing. 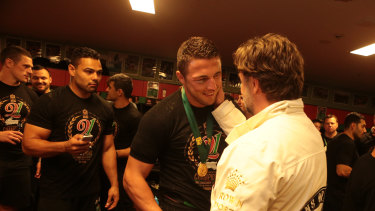 Russell Crowe and Sam Burgess are not on speaking terms. Credit:Christopher Chan

Phoebe Hooke is understood to have made a lengthy statement to police on Wednesday. The dossier is said to be so large, and containing so many allegations of criminal behaviour involving several people, it was handed to detectives at the force’s State Crime Command.

And next month, on November 16, Burgess will appear in Moss Vale local court to face charges of intimidation involving a run-in with Mitchell Hooke in the Southern Highlands in October last year. Burgess has already pleaded not guilty to those charges.

While people will sit in judgment about the whole affair, the full details may never come to light.

Former head of football Shane Richardson, though, was adamant he had no knowledge of the domestic violence claims, nor that McDonald had seen Burgess – let alone injected him with a heavy sedative.

He also denied any knowledge of the misuse of prescription drugs, which was also claimed in the story.

“I have no knowledge whatsoever of the incident and the doctor at no stage told me about that incident — that’s fact,” Richardson said.

Like Crowe, Richardson fell out with Burgess following the judiciary blow-up. He was one of the few people at Souths who dared take on Burgess and they butted heads regularly.

It was also Richardson who convinced the NRL to accept Souths’ evidence that Burgess had to be medically retired at the end of last season because of a serious shoulder injury.

The enormous payout saw Richardson fall out with Pappas, who was angry about how it damaged Souths' bottom line.

As fingers were pointed all over town on Friday, the question was asked: if Souths had so much dirt on their captain, wouldn’t they just destroy the contract and not pay a cent?

The counterargument is they were complicit in his behaviour, turning a blind eye and therefore enabling it.

They are questions ARL Commission chairman Peter V’landys and the NRL integrity unit must answer in time. Rugby league clubs have rarely taken responsibility for the men they create.

As for the rest, they are matters for the courts, where we will be seeing a lot more of rugby league's former glamour couple.

Wallabies selection a shock for Powell
NRL fans react to Panthers thrilling win over Roosters in epic finals ‘classic’
Best News
Recent Posts
This website uses cookies to improve your user experience and to provide you with advertisements that are relevant to your interests. By continuing to browse the site you are agreeing to our use of cookies.Ok