Richmond into another grand final after edging valiant Port Adelaide

Adelaide: Richmond staved off a stirring changing-of-the-guard challenge from Port Adelaide to go within touching distance of their third premiership in four years after prevailing in a heart-stopping preliminary final.

The Tigers, the undisputed heavyweight champions of the past four years but forced this season to ply their trade away from their MCG stronghold, had to wait until the last minute to be certain of victory against the valiant Power.

On Friday night at Adelaide Oval, as anticipated, almost nothing separated the two sides. 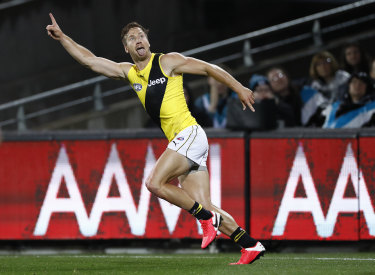 Richmond did it by inches – turning a two-point quarter-time deficit into a half-time deadlock and a two-point three-quarter-time edge ahead of the gripping fourth term in which neither team blinked.

Tom Lynch narrowly missed a set shot in the first minute of the third before rival spearhead Charlie Dixon bombed from 50m to give Port the edge.

A pair of clever goals to finals specialist Kane Lambert – a clean pick-up and scrambling effort and a free kick against Hamish Hartlett for deliberate out-of-bounds – had the Power, chasing their first grand final since 2017, on the ropes.

The home side's bid was thwarted when brave Brad Ebert, the nephew of Port's greatest champion Russell Ebert, staggered off the ground to a standing ovation late in the fourth after his head slammed into the turf following a brave against-the-flight challenge on Jack Riewoldt.

Despite the blow, Port never stopped, continuing to blaze away and force extra time before big Tiger Toby Nankervis snared the game-saving mark in defence inside the last minute.

The clearances told a story; Port had the edge 20-13 in the first half whereas Richmond had the ascendancy after half-time, 28-9.

The low-scoring arm wrestle had everything – a report against Pete Ladhams for a jab to the outstanding Noah Balta's stomach, crunching tackles and a steadfast refusal to concede.

Port's ascendancy at the contest and in the territory was eventually dragged in and overhauled by the Tigers, who at one stage kept the hosts scoreless for 32 minutes.

Dustin Martin slotted the opening goal, a magnificent evading and snapping effort, before Port hit back through the finishing of Connor Rozee and stirling playmaking of Robbie Gray.

In the second stanza Martin was too strong for Darcy Byrne-Jones in a one-on-one, marking and goaling to level the scores.

The champion Tigers kept grinding away before finally keeping the challengers at bay thanks to the proficient Lambert.

Port fans held their breath when Xavier Duursma copped a solid bump from Riewoldt, a fortnight after the Power youngster was concussed by Mark Blicavs in the qualifying final.

Duursma shook off Riewoldt's hit to generate plenty of forward drive for Port, producing a swag of inside-50s and goaling moments before the quarter-time siren to give the Power the slender edge. 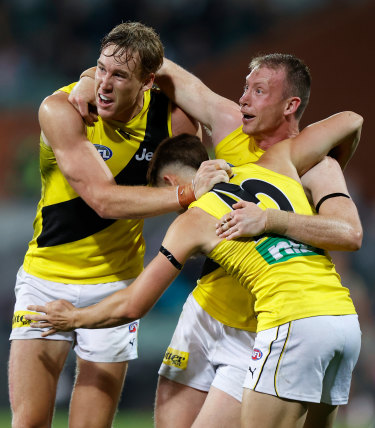 But Duursma had a moment in the second term that he would want back when, spotted up cleverly by Rozee, he spilled a sitter of a mark in attack at a time Port had dried up and desperately need any score.

Rozee, last year's rookie sensation whose second season has been somewhat less spectacular, loomed as the game-breaker when he bagged two first-half goals – equalling his best haul of 2020.
The pair – and Port – will assuredly be back bigger and better in 2021.

Tom Hawkins' errant kicking ensured a clean sheet for Trent McKenzie a fortnight ago but this time the Port defender's resoluteness made life hard for long-time Power bogyman Riewoldt.

Riewoldt slotted an early goal thanks to a free against Tom Jonas but otherwise had his colours lowered by McKenzie, in an admittedly tough, drizzly night for the big forwards.

The Richmond talisman was held to just six kicks.

But he won't mind at all.

He has bigger fish to fry next Saturday at the Gabba.

Australia to replace New Zealand as host of the Rugby Championship

NRL 2020: New competition for the best country teams to take on their city rivals

Eels legend wants back in the NRL after COVID hit

Broncos $975k star’s move to Dragons ‘will happen’ with Griffin ‘a big fan’
Bledisloe II: Wallabies vs All Blacks live blog
Best News
Recent Posts
This website uses cookies to improve your user experience and to provide you with advertisements that are relevant to your interests. By continuing to browse the site you are agreeing to our use of cookies.Ok