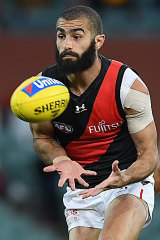 Adam Saad wants to be traded to Carlton.Credit:Getty Images

Essendon have downplayed the impact of a number of senior players wanting out, saying that new senior coach Ben Rutten needs players who are "fully committed to his vision".

Amid the fallout of Adam Saad and Joe Daniher confirming publicly that they wanted to depart Tullamarine, the club's general manager of football Dan Richardson admitted that a cultural shift was taking place as John Worsfold departs after five seasons as senior coach.

Asked specifically whether there was anything the Essendon hierarchy could have done better to placate the likes of Saad and Daniher – who are seeking moves to Carlton and the Brisbane Lions respectively – Richardson said the challenges presented by 2020 had been difficult for everyone.

"I think the hub environment … for some players has been more challenging than others.

"But culturally I think there's a shift taking place."

Reflecting on Saad and Daniher's decisions, Richardson said the Bombers felt both players had been "50-50" chances to stay.

"Adam was probably a little bit more surprising that Joe, but nonetheless I guess with player movement becoming more active in recent times, with the introduction of free agency, he's obviously weighed up a number of things including a compelling offer from Carlton," Richardson said.

"Given he's not a free agent, we need and should expect a compelling trade to take place. So we'll work through that as we lead into the trade period."

Essendon have undergone a sometimes contentious coaching succession plan after it was announced last year that Rutten would replace coaching veteran Worsfold for the 2021 season.

Richardson said Rutten might "ruffle a few feathers" as he imprinted his expectations on the club and the playing group.

"Ben's very strong on and very clear with his expectations with players. We need players that are fully committed to his vision, and where we're taking the club," Richardson said.

"If that means we unsettle or ruffle a few feathers along the way, because we're asking players to put the team first, then so be it.

"I don't think we should apologise to anyone, even if our fans, if that's what we're doing.

"Where we want to get to is build a team that wins premierships. And that's what we need to do."

Richardson said there were a few ways to gauge whether the succession plan was successful, confirming however that "we're not happy with the year that we've had".

"A lot of Essendon people haven't heard a great deal from Ben yet, but that's because John was senior coach," Richardson said.

"Ben's certainly spent a really valuable year positioning himself and learning from John and I think he's ready to take the reins.

"He's going to lead the club really strongly. Sometimes that requires, I guess, some people to be a little bit uncomfortable about that."

Richardson said the loss of some senior players meant the club was well positioned to "rejuvenate" the list.

He stressed that the club had enough talent – from Andy McGrath, best and fairest Jordan Ridley, Kyle Langford, Darcy Parish and Sam Draper as well as recruits from other clubs in Dylan Shiel, Jake Stinger and Devon Smith – to ensure a long-term rebuild wasn't needed.

"They're all coming into the prime of their careers so certainly we think it's an opportunity to rejuvenate the list, certainly it doesn't need to be a long-term rebuild."

Broncos snubbed in Queensland State of Origin squad reveal
Why you’ll find Phil Gould at every Warriors NRLW captain’s run
Best News
Recent Posts
This website uses cookies to improve your user experience and to provide you with advertisements that are relevant to your interests. By continuing to browse the site you are agreeing to our use of cookies.Ok