Finn Russell made his long-awaited return to Scotland duty on Friday night as Gregor Townsend’s men made light work of a hapless Georgia team.

He came on after 54 minutes with his side 22-7 up and nearly set up two tries within his first four minutes on the pitch. The fly-half brought some new life to a Scotland team that had been on cruise control up until then against a dreadful Georgian side.

It was the forwards who laid the foundations for the Scotland win but, when Russell came on, there was an added spark to the backs as well. 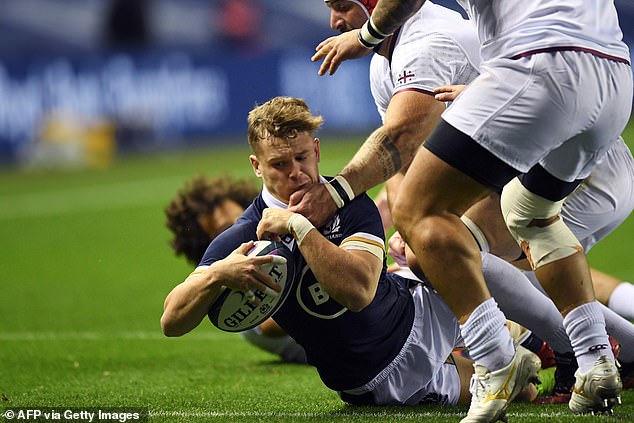 Tries from Darcy Graham, Fraser Brown and Hamish Watson put the hosts 17-0 up at the break

He threw a couple of nice passes but, in truth, it was pretty easy for him — or anybody — to do that as this was a really one-sided game. Eight tries and four conversions for Scotland told its own story.

At least his appearance puts an end to the row between him and head coach Gregor Townsend that erupted ahead of the last Six Nations. He was back for the first time in over a year and played like he had never been away.

There is a trickier occasion coming up next week against Wales in the Six Nations but Scotland will have a better chance of winning that game with Russell involved.

It took just two minutes for Scotland to go ahead with Darcy Graham producing a piece of magic. After relentless pressure on the Georgian line, the winger took a quick tap-penalty and ran with it himself. For a small man, he showed great physical strength to shrug off two tackles and get over the line. 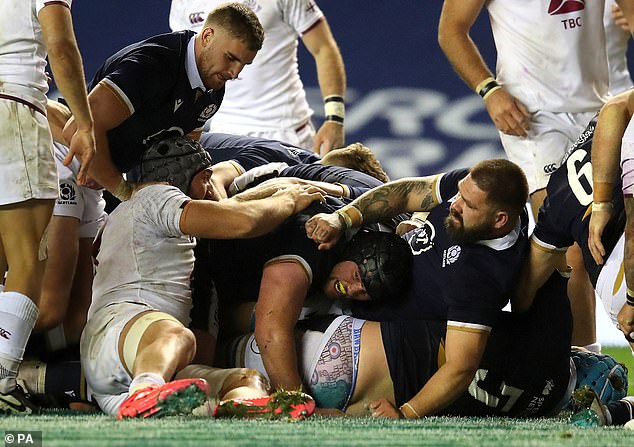 The conversion from Adam Hastings went over off one of the uprights.

It may have been a terrific start by Scotland but they failed to build on it despite having all the play.

There were far too many handling errors at crucial times to add to their total. A case in point was when a chip kick from Hastings should have been gathered by centre Chris Harris, who instead knocked the ball on when he had the try line at his mercy.

Scotland’s second try came in the 26th minute, thanks to the power from the forward pack in a move started and finished by captain Fraser Brown.

He threw the ball to Ben Toolis in the line-out and got in behind his pack. When they rumbled over the line, he popped up with the ball and with a big smile on his face.

Hastings wasn’t so lucky with his conversation attempt, with the ball bouncing back off the outside of the upright. 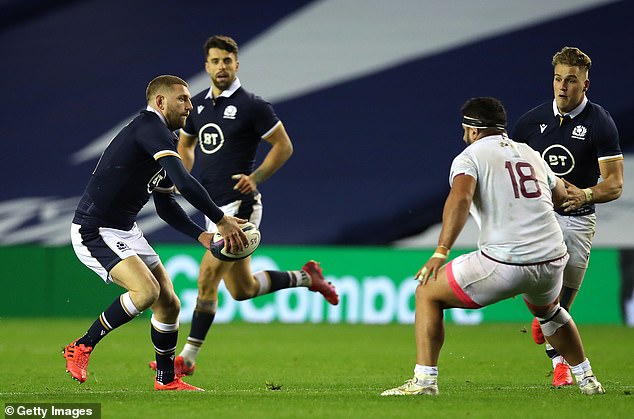 Six minutes later the hosts went over for their third try. The forwards roared forward and then the unlikely figure of prop Rory Sutherland played a super pass to Hamish Watson, who only needed to flop over the line to score. But Hastings missed his second conversion of the game.

Three minutes before the break, No 8 Matt Fagerson came off with a leg injury he picked up in a tackle with Otar Giorgadze. Cornell du Preez took his place in the back row and nearly marked his return to the national side with a try. Only some great defending by Georgian flanker Grigor Kerdikoshvili stopped him grounding the ball over the line.

French referee Alexandre Ruiz wasn’t sure and only ruled the score out after consulting with his TMO and watching the incident on the big screen.

It was the last action of a half that saw Scotland go in three tries to the good against a Georgian side that had hardly been out of their half.

Georgia enjoyed their best period early in the second half and were rewarded with a try six minutes in. 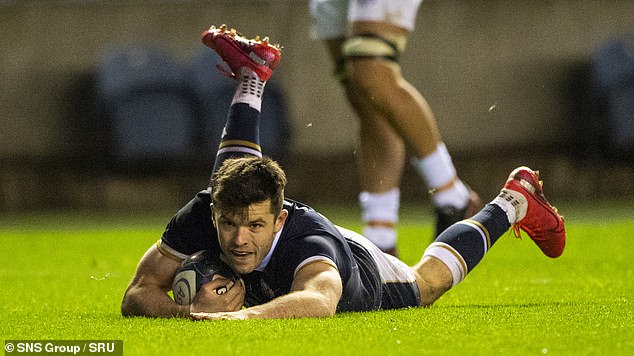 Scrum-half Vasil Lobzhanidze played what was going to be a forward pass but a deflection off Scott Cummings played it into the hands of Akaki Tabutsadze, who shrugged off winger Duhan van der Merwe to run in to score.

The whole team engulfed the Georgian winger as they celebrated their special moment in style. To round off a special moment for the visitors, Tedo Abzhandadze put over the conversion.

Their moment of glory would last only four minutes as a Scotland forward drive put them over the line with captain Brown coming up with the ball for his second try of the night.

Hastings hit the post with the conversion yet again, with the ball bouncing back off it and to safety.

Fifty-four minutes on the clock marked the return of Finn Russell to Scotland colours when he replaced the injured James Lang. Hastings moved into the centre to let Russell slot in at No 10.

Within five minutes of coming on, the Racing 92 star played a superb pass that nearly played in Graham. Moments later, he was at it again with a long pass setting up a four on two out wide that Blair Kinghorn failed to make count.

On the hour mark, replacement hooker Stuart McInally went over after yet another forwards drive as the tries just kept on coming. This time Hastings put over the conversion.

Next, it was winger van der Merwe on his debut as the Georgia defence parted to allow him to score under the posts.

Hastings put over the extras.

To compound Georgia’s misery, Gela Aprasidze was sin-binned for slapping away a Toolis pass.

Then Graham went over for his second of the game six minutes from the end with Hastings converting again.

It wasn’t over yet, with Kinghorn going over for a try converted by Hastings yet again.

McKenna and Ward back to boost Bombers and Giants

‘It’s not just random trolls’: Source of Seibold rumours to be unmasked

SIR CLIVE WOODWARD: Wasps in the mood to pull of shock against Exeter
Ireland urged to be patient as Farrell's men seek to rack up points
Best News
Recent Posts
This website uses cookies to improve your user experience and to provide you with advertisements that are relevant to your interests. By continuing to browse the site you are agreeing to our use of cookies.Ok