Essendon's key defender Michael Hurley and concussed forward Jacob Townsend are among five changes for the Bombers who decided to rest midfielder Devon Smith and ruckman Tom Bellchambers for their must-win clash against St Kilda.

As injuries continue to bite hard on the Bombers in 2020 they also managed defender Aaron Francis, Mason Redman and were forced to leave out veteran David Zaharakis after he strained his quad when he kicked a match-saving goal in the final quarter against the Gold Coast. They included Sam Draper, Kobe Mutch and Josh Begley for the big game. 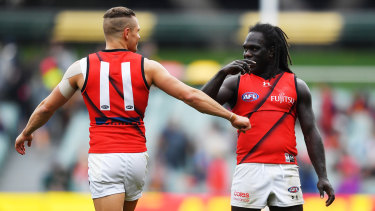 David Zaharakis and Anthony McDonald-Tipungwuti, who will play his 100th game.Credit:Getty Images

The Saints recalled Zak Jones and Paddy Ryder with midfielder Seb Ross and Jack Lonie back as they dropped Ed Phillips and managed Jake Carlisle while Jade Gresham and Dean Kent miss through injury.

The Bombers' depth is being tested as Zaharakis joined an injury list that includes the skipper Dyson Heppell as well as Jake Stringer, Orazio Fantasia, Cale Hooker, Joe Daniher, Patrick Ambrose and Jayden Laverde, a group with more than 800 games experience.

Daniher did not play in Essendon's scratch match against the Western Bulldogs on the Gold Coast on Saturday with the Bombers adamant they had not planned to play him despite reports earlier in the week to the contrary.

The Bombers will also celebrate Anthony McDonald-Tipungwuti's 100th game against the Saints with the 27-year-old – who has missed just one game on the way to his first 100 games – joining another Tiwi Islands product Dean Rioli as the only Bomber to have played 100 games in No.43.

The Western Bulldogs managed out-of-form forward Josh Bruce and the emerging Latham Vandermeer with midfielder Lachie Hunter returning for his first game since round seven having had a season interrupted with a club-imposed suspension and wellbeing issues. Jason Johanissen and Zaine Cordy are injured with Roarke Smith, Ben Cavarra and Rhylee West returning.

The Hawks resisted calls to make wholesale changes with Changkuoth Jiath making his first appearance of 2020 for the Hawks, with Shaun Burgoyne and Conor Glass included. Isaac Smith and Jon Ceglar are injured and Tom Scully is being rested.

Jeremy McGovern is back in defence for the Eagles alongside Nic Reid who was added to the list in the pre-season supplemental selection period. and Brayden Ainsworth. Injured duo Liam Duggan and Jake Waterman are out and Jarrod Cameron was dropped.

‘18th man’ that has Panthers legend ‘worried’ about Bunnies ambush

Chook raffle: How you can have your business on SBW’s jersey

NRL 2020: Cameron McInnes gives Paul McGregor the jersey off his back in perfect Dragons farewell
NRL 2020: Souths Sydney snatch win with ‘perfect’ five minutes, Cowboys coach Josh Hannay blasts side
Best News
Recent Posts
This website uses cookies to improve your user experience and to provide you with advertisements that are relevant to your interests. By continuing to browse the site you are agreeing to our use of cookies.Ok