Richmond are on the move and within touching distance of the top four but Gold Coast face a major fight for a breakthrough finals appearance after the Tigers posted a 21-point win at the Gabba on Monday night.

The Tigers trailed by 10 points at half-time, having been held goalless in the second term, but responded after the main break to close within two points of the top four with six rounds remaining. 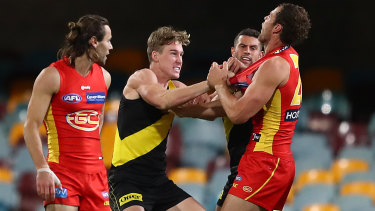 The Suns, with a draw and four defeats from their past five matches, are now six points adrift of the top eight.

This contest ended 33 matches across 20 days in a "footy frenzy" that has support to be replicated – at least in some form – next year. In the meantime, clubs can breathe easy this weekend with a Friday to Monday schedule, before another compressed block awaits from Thursday August 27.

Coming off a nine-day break, the Tigers dominated the first term but were unable to capitalise on the scoreboard. They then struggled to get their hands on the ball, and the Suns pounced.

Gold Coast's vibrant talent on all lines was evident. Jack Lukosius was superb off half-back, while Noah Anderson found plenty of the ball. Ben King threatened to have a big evening but the young forward was largely silenced by Noah Balta.

Stuart Dew's men looked to attack through the centre corridor as often as possible, and did so with conviction in the second term. The Tigers prefer to go wide and kick long to their key forwards. That's what they did in the third term, and the results were telling, as they booted three goals. 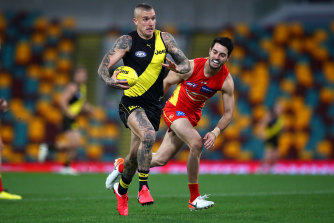 Dustin Martin on the burst for the Tigers.Credit:Getty Images

Jack Riewoldt was busy all night. Always on the move inside attacking 50, he led hard and converted his side's first, then found fellow tall Tom Lynch on the lead for their second. When Marlion Pickett snapped on his left foot with under two minutes remaining, the Tigers had wrestled back the lead.

Skipper Trent Cotchin, rested in the loss to the Power, added class and grunt through the midfield and was dominant in the clearances on a night Dustin Martin was relatively quiet.

The Suns, off only a five-day break, missed veterans David Swallow and Jarrod Harbrow but closed to within a point when former Tiger Brandon Ellis capitalised on a free kick. But this was undone soon after when Alex Sexton breached the protected zone, conceding a 50-metre penalty and gifting Kamdyn McIntosh a simple set shot. 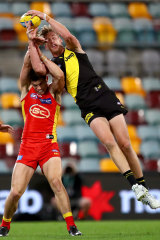 Tom Lynch pulls down a strong mark against his former team.Credit:Getty Images

The two clubs have weekend engagements in the Northern Territory. The Suns back up against Carlton at TIO Stadium on Friday, while the Tigers and Essendon clash in the Dreamtime clash at the same venue a night later.

LYNCH SCRUTINY?
Richmond forward Lynch faces scrutiny for an off-the-ball "cheap shot" on opponent Sam Collins. Footage behind the play appeared to show Lynch whacking Collins in the stomach before dashing off on a lead where he marked and converted a goal that iced the win. Collins then remonstrated with Lynch while Suns skipper Jarrod Witts also got involved. Collins appeared to be still angry with the chain of events in the dressing room after the match. St Kilda great Nick Riewoldt branded the whack a "cheap shot" on Fox Footy.

OLD MATES
Ellis was given an offer too good to refuse by the Suns last year and left the Tigers with two premiership medals. McIntosh and Ellis were all smiles when they greeted each other on the wing before the opening bounce. Still, there's typically a bit of spice between former teammates and that was shown in the first term when the Tigers, with Jake Aarts having marked at half-forward, had the ball reversed when Ellis was hit off the ball.

LEARNING HIS CRAFT
Matt Rowell may be missing on the field because of a season-ending shoulder injury but he isn't wasting time learning about his team. He was again seen on the boundary against the Tigers with the headset on, and Dew said he had been asking pertinent questions. Rowell has a long career ahead but already he seems to be showing all the traits of a good coach. 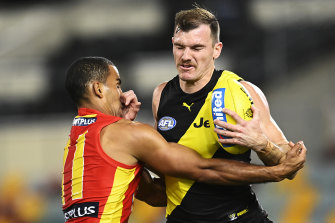 Kamdyn McIntosh of the Tigers is tackled by Touk Miller.Credit:Getty Images

SMELLY BUSINESS
Hardwick had revealed that the Tigers had become so frustrated with conceding 50-metre penalties that anyone who did so had to change the nappy of Trent Cotchin's young lad, Parker. While the coach was happy the Tigers had been on their best behaviour against the Suns, Cotchin and wife Brooke may have hoped for a helping hand.

BIRTHDAY DELIGHT
Hardwick and Dew share August 18 as a birthday. Hardwick turns 48 while Dew will be 41. They are also good mates from their time with Port Adelaide, where they enjoyed the 2004 premiership. But come Tuesday Hardwick had more reason to savour a birthday cake.

KFC SuperCoach NRL: Who will claim the $50,000 first-place prize?

England's Eddie Jones will have no restrictions on team selection

‘What else do we use?’: Ella calls for common sense on Aboriginal flag ban

‘It’s not just random trolls’: Source of Seibold rumours to be unmasked

‘It’s not just random trolls’: Source of Seibold rumours to be unmasked
NRL 2020: ‘Prominent name’ behind Anthony Seibold rumours
Best News
Recent Posts
This website uses cookies to improve your user experience and to provide you with advertisements that are relevant to your interests. By continuing to browse the site you are agreeing to our use of cookies.Ok