The Sydney Roosters and Penrith could hardly be in more different places heading into Friday night's NRL finals opener at Panthers Stadium.

Heading into the semis, you need momentum and luck with injuries and Penrith have got both. 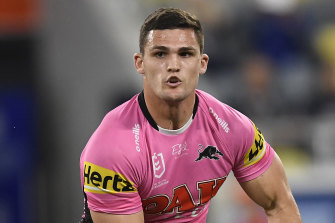 Andrew Johns believes Nathan Cleary is primed to take the Panthers to the preliminary final after they meet the Roosters on Friday night.Credit:Getty Images

How the Roosters can win

For starters, they get their defence back in order.

Their right side of Mitch Aubusson and Matt Ikuvalu was really poor, but they get back Joseph Manu, who I believe is the best centre in the game, and the experienced Brett Morris on that edge. That’s what is needed to stop Penrith’s left-side attack of Billy Kikau and Stephen Crichton.

The big inclusion for the Roosters is Isaac Liu in the middle of the field at lock. Like Victor Radley before he was sidelined for the season with injury, he does a lot of work you don’t see.

Liu starting makes their bench stronger. Angus Crichton can have a real impact when Robinson decides to use him.

For Penrith, one weakness I can identify is the height of their wingers, Brian To’o and Josh Mansour. The Roosters' Daniel Tupou is about 10cm taller than both of them if they kick to the corners.

How the Panthers can win

The Panthers are dangerous all over the park, but the left is their go-to side, playing early to Kikau and Crichton.

Then there’s the unpredictability of five-eighth Jarome Luai. He’s a lot better player than I ever imagined. At the start of the year, I thought Matt Burton should be the starting No.6. I’ve had to eat some humble pie. I got it very wrong.

Luai just plays what’s in front of him and that style of attack is the Roosters’ weakness.

Besides the Storm, no team is better at stopping structured play than the Chooks. You can’t beat them with playing that way because they will hold you out all day.

But, as we saw with Souths, they struggle defensively against ad-lib play. 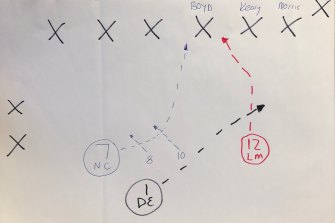 If Cleary can draw Boyd Cordner out of the line he can put Liam Martin one-on-one with Luke Keary.

The natural reaction of the defenders in front of him is to stop. They can’t see the ball so they half panic. Manly’s Cliffy Lyons was the best at it during his career, changing speed, drawing defenders out of the line.

Cleary is also starting to perfect it. He’ll try to suck Roosters back-rower Boyd Cordner out of the line. If Cordner comes out, it gives him three options.

The first is his big show-and-go. He can dummy and get in behind the back-rower, like he did in the final minute against the Cowboys in round 10 to score.

If Cordner panics and comes in, Cleary can play a short ball to Liam Martin, which gets Martin one-on-one with Luke Keary. Or he can play out the back to Edwards.

The Roosters can stop it by working together, moving forward as a defensive line. Easier said than done.

THE VERDICT
Friend being out changes everything for me. I had been close to tipping the Roosters but that’s an eight-to-10 point turnaround. Penrith too strong at home.

NRL 2020: Melbourne Storm could be stuck on Sunshine Coast for weeks

Inside the Wests Tigers drama: why Maguire is losing the dressing room

It’s been a big week in art … AFL finals poster

Port turn on the afterburners to overpower Cats in fierce opening final
Papalii primed to lead Raiders’ finals charge
Best News
Recent Posts
This website uses cookies to improve your user experience and to provide you with advertisements that are relevant to your interests. By continuing to browse the site you are agreeing to our use of cookies.Ok