The plethora of own goals that Richmond have conceded this season would have buried a lesser outfit.

The Tigers have not only expertly absorbed the many bumps presented by a series of off-field scandals and distractions, they have thrived.

In this year of already unparalleled adversity, Richmond have defied more obstacles than anybody to cement the coveted double chance and, with it, premiership favouritism after clinically taking care of Adelaide, wooden spoon-bound but resurgent this month. 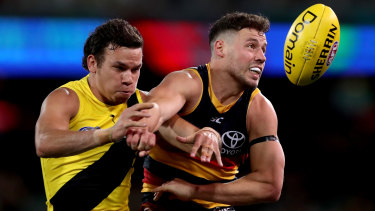 On Saturday the Crows provided brief resistance early – but couldn't maintain it.

Chasing their fourth win of the season – all in succession – Adelaide's thirst for the contest was evident in the first quarter.

Burly ruckman Reilly O'Brien threw his massive frame around fearlessly, shading Toby Nankervis at the taps, snaring some mighty pack grabs and generally ensuring Richmond players were listening out for those giant footsteps whenever they had the pill in their hands.

Rory Laird and the Crouch brothers, Matt and Brad, followed O'Brien's wholehearted lead and the Crows had their noses in front narrowly midway through the first term after goals to Shane McAdam and Taylor Walker, whose free kick conversion moved him past iconic full-forward Tony Modra to become Adelaide's all-time leading goal-scorer.

With recent victories over lowly Hawthorn, under-achieving Greater Western Sydney and inconsistent Carlton, dreams of a massive scalp floated fleetingly for Adelaide to cap 2020 on a huge high and build into 2021 buoyantly.

But Richmond had far too much class and cattle, which became more and more palpable the longer the match went.

After notching two of the first three goals, the Crows were held goalless in the second term, which was highlighted by Dustin Martin's checkside goal to the River End from the boundary.

Matched at the stoppages but clearly winning the territory battle due to their sharper skills, Richmond pressed home their advantage in the third stanza

Mabiol Chol goaled after plucking a one-handed mark in front of 200-gamer Daniel Talia from a searing Jack Riewoldt entry and Daniel Rioli was rewarded for his forward pressure, converting a free kick after tackling Brad Crouch.

Darcy Fogarty's spectacular pack grab was the Crows' first goal since midway through the first and rare highlight for Adelaide, brought back to earth with a thud.

Josh Caddy appeared to sustain a leg injury in the second stanza but returned to the field in the third after receiving treatment and slotted his second major after out-bodying first-year Crows defender Andrew McPherson in a one-on-one.

Caddy's strike pushed the Tigers' buffer out to 36 points at three-quarter-time and the visitors were never remotely threatened thereafter.

Martin's contested mark at the death and deftly chipped assist to Riewoldt for the last goal provided the icing on the cake – with the anticipation of more to come next month.

By his own lofty standards, Martin hasn't set 2020 alight, posting career-low disposal and tackle numbers this season and accruing his most modest goal tally since 2016.

Martin is timing his peak perfectly.Not for the first time a thorn in Adelaide's side in September, Martin played as well as he has all season, quelling everything and everyone the Crows threw at him. Mr September looks ready for October.

Playing his first match since round five, veteran Shane Edwards slotted back into Richmond's line-up seamlessly, as did defensive general David Astbury who was solid in his first hit-out since round four.

With Tom Lynch (hamstring), Shai Bolton (corked calf) and Dion Prestia (ankle) all keen to prove their fitness and press their claims for selection for the qualifying final, the Tigers have some selection headaches ahead of them – all of them pleasant.

Raider for life: Josh Papalii stretches deal until end of 2025

NRL hands down big fine in breach notice to Raiders star
Johannisen speaks up, for his daughter
Best News
Recent Posts
This website uses cookies to improve your user experience and to provide you with advertisements that are relevant to your interests. By continuing to browse the site you are agreeing to our use of cookies.Ok