Wellington: Australia have been drawn against fierce rivals New Zealand – the tournament hosts and defending champions – in Pool A at next year’s Women’s Rugby World Cup.

Audience members gasped when the trans-Tasman neighbours were placed in the same pool at a draw ceremony in Auckland on Friday, attended by New Zealand Prime Minister Jacinda Ardern. 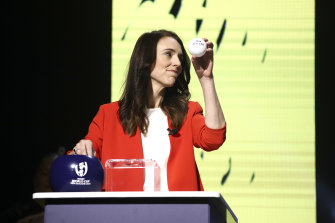 New Zealand Prime Minister Jacinda Ardern draws the Black Ferns to face Australia at next year’s Women’s Rugby World Cup to be held across the Tasman.Credit:Getty

The pool draw for the 12-team tournament threw up “derby” clashes between regional rivals. England, the 2017 World Cup runners-up, have been drawn with France in Pool C while North American rivals the United States and Canada are drawn in Pool B.

For the first time in the history of the women’s tournament, the draw was based on seedings. The top seven teams from the 2017 World Cup — New Zealand, England, Australia, the United States, France, Australia and Wales — qualified automatically while five others have or will advance through qualifying tournaments to be played this year.

Teams were placed in four bands which were based on world rankings at January 1 this year.

New Zealand’s opponents in Pool A are Australia, Wales and the winner of the final qualifying tournament.

The United States and Canada are drawn in Pool B with the winner of European and Asian qualifiers which have yet to be played.

England and France are joined in Pool C by Fiji, who won an Oceania qualifying tournament, and South Africa who qualified through an African regional event.

The tournament will be played from September 18 to October 16 in Auckland and the northern city of Whangarei. If New Zealand remains free of COVID-19, matches will be played in full stadiums.

New Zealand captain Ella Blackwell said her nerves were on edge as she waited for Friday’s draw to unfold.

“It was pretty nerve-racking watching those balls come out,” she said. “In my time I’ve never been in a pool with Australia but each time we come up against each other it’s a massive battle and no doubt next year is not going to be any different.

“It’s funny how the pools have come out. We’ve got an Australasia pool, a North American pool and a Europe. All across all pools we’ve got some really quality teams.”

World Rugby chairman Bill Beaumont, who watched the draw from London because of travel restrictions, said the tournament would be an inspiration to young players, male and female.

“The growth we’ve experienced in women’s rugby is proof of the ‘see it, be it, play it’ mantra which is at the heart of our ambitious 2017-25 Women in Rugby plan to inspire participation and audience engagement across all age groups,” Beaumont said.

“New Zealand 2021, coupled with the enormous stage that the Olympics provides, will champion that mantra in a golden year for women in rugby and a year of celebration for our sport."

Final twists a fitting farewell to strangest of seasons

Maro Itoje questions the media over ‘inconsistent’ Marcus Rashford treatment
Scotland's Autumn Nations Cup clash vs Fiji next Saturday is CANCELLED
Best News
Recent Posts
This website uses cookies to improve your user experience and to provide you with advertisements that are relevant to your interests. By continuing to browse the site you are agreeing to our use of cookies.Ok