The New Zealand Warriors' 148-day sacrifice to save the NRL is finally over, ending in a well-deserved celebration following their victory against Manly on Sunday afternoon.

A season that promised so much has delivered very little for the Sea Eagles, who despite being plagued by injury must do some soul-searching over the summer if they are to become premiership contenders in 2021. 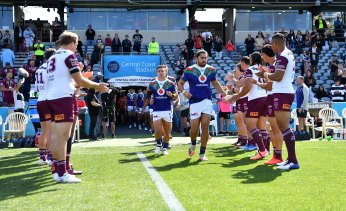 The Manly Sea Eagles formed a guard of honour before the game to welcome the Warriors on to the field in what was their last game before returning home to friends and family in New Zealand.Credit:NRL Photos

But Sunday afternoon was all about the Warriors who, almost five months after landing in Tamworth on May 3 to prepare for the NRL's resumption, will return home to New Zealand.

Manly formed a guard of honour before the game to welcome the Warriors to the field in one of the feelgood moments of the season.

The gesture didn't stop Todd Payten's men from piling on the points against a lacklustre Manly side who conceded more than 40 points for the second consecutive week.

A hat-trick to Adam Keighran, playing in front of friends and family, ensured the Sea Eagles would not be able to gatecrash Adam Blair's retirement party.

The win was set up courtesy of a 16 minute try-scoring blitz in the opening half, with the Warriors crossing for five tries in 16 minutes despite dropping to a 10-point deficit in the early exchanges.

The Sea Eagles got off to a flyer courtesy of a precision cut-out pass from skipper Daly Cherry-Evans, who sent Reuben Garrick over in the corner untouched.

The Sea Eagles piled on the pain soon after when Canterbury-bound back-rower Corey Waddell bumped out of a Peta Hiku tackle to crash his way over to give Manly a 10-0 lead.

Despite all the momentum in the opening exchanges, the Sea Eagles gifted the Warriors their first try of the afternoon when Cherry-Evans collided with fullback Tevita Funa, who spilled a Chanel Harris-Tevita kick to present Kodi Nikorima with an easy four-pointer.

The Funa fumble triggered the Warriors into action, with Eli Katoa busting past Brad Parker soon after to carry two defenders over the tryline for a 12-10 lead after 20 minutes.

The onslaught continued from the ensuing set when Hiku's short ball saw Keighran, a Central Coast junior, hit a hole and score untouched for the Warriors' third try in seven minutes.

Keighran turned provider just two minutes later, combining with Hiku to send the off-contract Patrick Herbert over in the corner for a 20-10 lead and the Warriors' fourth try in ten minutes.

Manly's blistering start was soon a distant memory as Harris-Tevita inflicted more pain with a well-placed grubber that allow Katoa to dive over for his second of the afternoon and the team's fifth in a 16-minute period.

Just when it looked like the Warriors would run away with things, back-to-back tries to Manly winger Abbas Miski in the final three minutes of the first half saw the Sea Eagles head into the break trailing just 26-18.

All hopes of a come-from-behind win were soon dashed when Keighran crossed for two tries to register his hat-trick, ending Manly's dismal season with another loss.

CHRIS FOY: Rusty restart must give way to thrills to re-engage fans

Cripps’ shoulder reconstruction complete, expected to be ready for 2021
‘Huge respect’: NRL world thanks saviours
Best News
Recent Posts
This website uses cookies to improve your user experience and to provide you with advertisements that are relevant to your interests. By continuing to browse the site you are agreeing to our use of cookies.Ok