Why the footy frenzy should not be repeated

The "footy frenzy" has been a masterstroke in this bizarre AFL season. It's guaranteed the viability of a precarious campaign. It's been fresh and exciting. Amidst the melancholy of lockdown, it has been a relief. And after this year, it should never, ever happen again.

There are sports it suits. Basketball, for example, where NBA teams work their way through an 82-game regular season in six months. That's roughly an average of a game every 2.2 days, which makes it a classic buffet sport. But basketball is played in small, easily filled stadiums, footy in cavernous ones that will only be filled at times that are convenient for punters. And the physical demands of these sports mean you can play one basketball game after another in a way an AFL player can't. 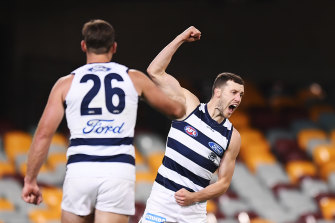 The much better comparison is with European soccer, which frequently punctuates its season with frenzies. So, Manchester City will often find themselves playing two or three games a week, rushing to Ukraine and back one mid-week, then off to somewhere like Rotherham the next. And while players can recover from a soccer match faster than an AFL game, the schedule is still impossibly gruelling for them. Clubs cope by rotating their way through the onslaught. So when do you choose to rest your star players? All at once, leaving you majorly exposed for a particular game? Or staggered so you're less exposed, but exposed more often? Which games will you decide matter and which ones don't?

That works brilliantly in soccer. It adds a whole new layer of intrigue. Fans trade sophisticated theories on who they would select for each game and why, and whether the manager might even change the team's formation to match available personnel. As a stupidly passionate Liverpool fan, I'll confess it's one of my favourite things about the season. But the problem is all the things that make it work in European soccer are exactly the things that would make it fail for footy.

Soccer frenzies usually happen because clubs are playing in up to four competitions simultaneously. Each competition has a different character. A looming mid-week Champions League game feels completely different to a League Cup fixture, which feels different again to the Premier League match in between. That makes each of these games fresh, and distinct, avoiding the "wallpaper" effect common in American baseball, and which some AFL fans experienced during the frenzy.

You might also decide to play a weakened team in the Champions League if you think you're safe in your group, but know you can't take risks in the Premier League. Or vice versa. The Premier League copes because the season runs for 38 games, which is long enough to iron out any kinks caused by these selection dilemmas. But most crucially, this is a sport without a salary cap, in which there are already great inequalities.

The richest clubs dominate, but they're also the clubs in the most competitions. That means that while they will occasionally risk dropping points against a smaller club by fielding a weaker side, it doesn't compromise the competition because their real rivals – the other big clubs – will have to do the same thing. Navigating this is a top team's brief. It's one of the foundations of the sport.

The AFL is completely different. It's a single competition in a salary-capped, equalised league with a relatively short season. Our mythology is that you put your best team on the park every week because there's nothing else to play for. When that pact is broken, something in the sport breaks along with it. Occasionally clubs will manage a senior player, especially if their finals place is assured, but this happens at the margins of the sport.

Frenzied fixturing puts it at the centre.

That's exactly what happened. Probably the best example was when St Kilda took the bulk of their rest against Geelong. Meanwhile, the Cats set themselves for that game, having taken their chances at selection the previous week. The result was something of a phantom match instead of a full-tilt, top-four showdown. We don't really know what that game meant. Maybe Geelong showed St Kilda their place, maybe they didn't.

And that's with shortened games. Absent a pandemic, that kind of thing undermines our game's essence. About the only competition that willingly does something like that is the NRL in its state of origin period, but that's a conscious decision to elevate origin above the league.

The AFL would be doing this for no good reason at all. The frenzy was fun in the circumstances, but once the novelty and necessity is gone, we'll be left only with a self-inflicted wound on the sport's integrity.

What channel is Ireland vs Italy on? TV, live stream, kick-off for Six Nations match

CHRIS FOY: Premiership integrity suffering from lack of quality
Roosters legend to retire, but not before helping club chase three-peat
Best News
Recent Posts
This website uses cookies to improve your user experience and to provide you with advertisements that are relevant to your interests. By continuing to browse the site you are agreeing to our use of cookies.Ok