This time last year Hudson Young was in the middle of an eight-match ban for a second eye-gouging offence and had just been forced to watch on as the Raiders went agonising close to an unlikely grand final upset.

Twelve months on, Young is now arguably rugby league's comeback story of the season after he started in the front row for Canberra on Friday night and played a big role in ensuring the Green Machine rolled on to a week three qualifying final against Melbourne. 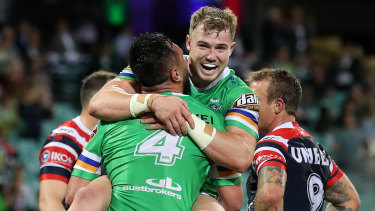 "He's had a couple of good games, but it doesn't make a season.

"He's always been a footy player, he's just as good a bloke. And if Hudson wasn't a good bloke he wouldn't be here at the club, and we wouldn't have stuck by him."

Young is off contract at the end of next year and Raiders officials expect plenty of interest from rivals for the blond youngster tipped to take over John Bateman's back-row position.

Stuart was blunt, however, when it came to retaining Young for the long haul, saying: "I can't be jumping every time a journalist rings me after someone plays a good game of football and says they want an extension on their contract. They either want to stay here or they don't."

Young told the Herald during the week how he had started working with sports psychologist Chris Horsley to help with his aggression, saying: "It's been about controlling those emotions and being disciplined – as a footy player as soon as you cross that white line you turn into someone you don't know sometimes."

He even admitted he may have "subconsciously" gouged players in the past without knowing it, an offence that has cost him 13 games on the sidelines through suspension in his short NRL career.

Young punched out more than 20 hit-ups in just over an hour against the Roosters before receiving a well-earned spell.

Stuart has lost count of the times he has praised Papalii and said on Saturday: "Papa doesn't need to get any better. He's so consistent, it's hard to maintain that consistency because he's already at such a high level, but if he doesn't play to that level, we don't win, it's as simple as that."

Papalii backed the Raiders pack to meet the challenge again against the Storm, this time at Suncorp Stadium.

"The belief is there. If we don't believe we can win the comp then we would have been out a few months ago," he said. "It would have been [easier having the week off]. We did that last year. But they [Melbourne] are there for a reason because they are playing good footy.

"We finished fifth because we were complacent in some games."

Papalii is from the same part of Brisbane – Logan – as Storm star Cameron Smith and said he looks up to the ageing great.

"Smits is the GOAT," Papalii said. "He's from the same region I am from in Logan and there are so many kids who look up to Smits. I am no different. As a young Logan boy growing up I used to idolise him … until I started playing."

Giselle Mather: Lack of coronavirus testing makes women’s game more stringent
AFL suspends Crows pair over cocaine incident
Best News
Recent Posts
This website uses cookies to improve your user experience and to provide you with advertisements that are relevant to your interests. By continuing to browse the site you are agreeing to our use of cookies.Ok